Semantics, semantics, semantics.  A statement can be both true and completely misleading.  Take this following statement: “The New Jersey Department of Health Announced on june 25th that an additional 1877 people had died of coronavirus”.  That sentence has one prepositional phrase: “on Monday”.  It has two verbs: “announced”, and “died”.  To which verb does “on Monday” apply?  Did they die on Monday?  Or did they die two months ago and were reported on Monday?

Consider that while you look at this graph from the NY Times: Note the title on the top: “New Reported Deaths”.  New Jersey reported 1877 additional deaths on June 25th.  But the people didn’t die on June 25th.  The NY Times appears to be graphing when deaths are reported.  Why does this matter?  Because it can take a month or more for many deaths to get reported.  While the epidemic is expanding, this delay may not produce much distortion and a plot of deaths by date will look very similar to a plot of deaths by date reported. But, while the epidemic is contracting the plots may diverge radically.

To illustrate this, take a look at this graph of weekly deaths from all causes, taken from the CDC: 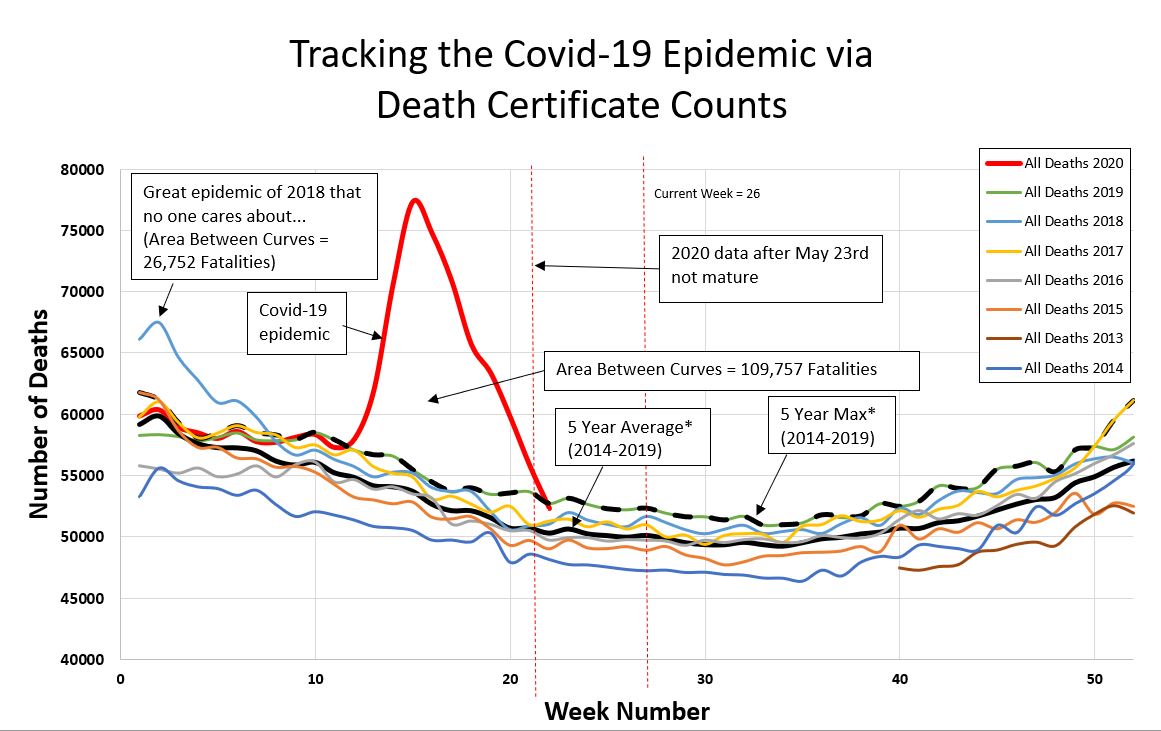 This chart simply lists all fatalities by week (with lots of notes tacked on).  The thing about this chart is it plots when the death occurs, not when it is reported.  The data for this file is available from the CDC here, and it is backwards updated every week.  Every time I download the latest update, the April 11th peak grows.  Not so with the NY Times data.  Every time I download a new copy of their database (here), new deaths are tacked onto the end, but prior death counts are not revised. 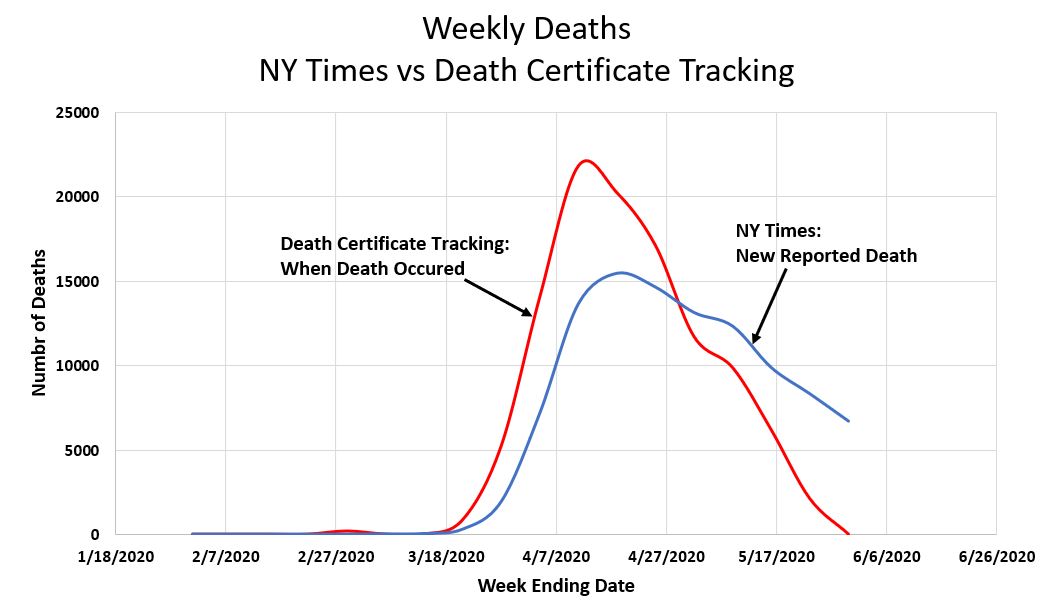 One line implies the epidemic essentially ended a month ago.  Another implies that it is still raging.  It just seems crazy, even though the NY Times clearly states they are plotting “New Reported Deaths”.  Nowhere do they state that they are plotting when people actually died.  But I know there are people who interpret the data that way.  In fact, the worldometer site, which draws heavily from NY Times data, simply labels  their graphs “Daily Deaths“.

We live in an era of politicized pandemics.  While it is entirely possible that the curve generated by the death certificate tracking isn’t the true covid-19 death curve, the NY Times needs to clarify and revise the way it reports covid-19 deaths.  “New Reported Deaths”, what does that even mean?

Viewers Noticed Something Off About Kamala Harris' Interview in Louisiana
Townhall
'The difference matters': Reporter notes that the 'shot at' narrative is nuanced and suspect might not have taken aim
Twitchy
Concerning Social Media of 'Person of Interest' in Highland Park Mass Shooting
Redstate
BLOODBATH: Six Dead, Two Dozen Wounded at Suburban Chicago 4th of July Parade [UPDATED]
PJ Media