I have a couple posts on the coronavirus (here is latest).  For this one, I am going to review and compare the US to Italy, Sweden, Germany, and the UK.  What you read in the news isn’t a good representation of what is going on.  Let’s start with the US.  I’m sticking the NY Times data for this, but I’m using the same filtering and shifting method as previous posts, except with a more detailed explanation this time.

Here is the NY Times data on daily coronavirus infections and death.  This is not the cumulative total, just how many infections and/or deaths were reported on any particular day: 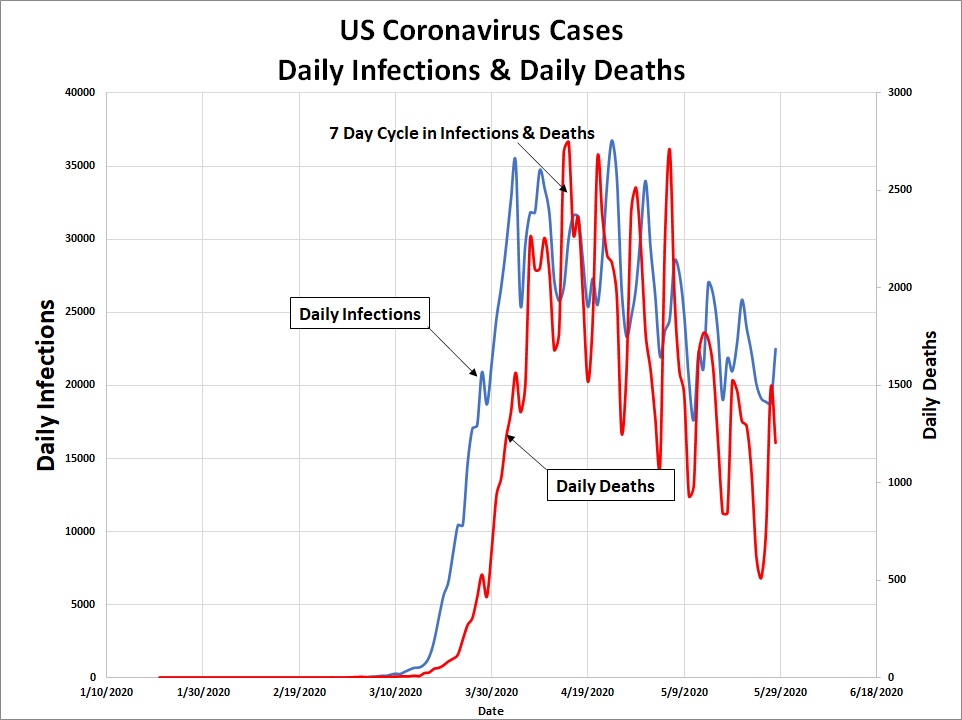 If you look at the data, it is pretty confusing with wide swings in both infections and deaths. For whatever reason, there is a massive 7 day cycle in the data. The cycle is so strong it hides trends. There are two ways to eliminate the cycle and highlight the trends: use weekly data instead of daily, or use a 7-day averaging filter. I chose the latter for my charts, and it now looks like this: 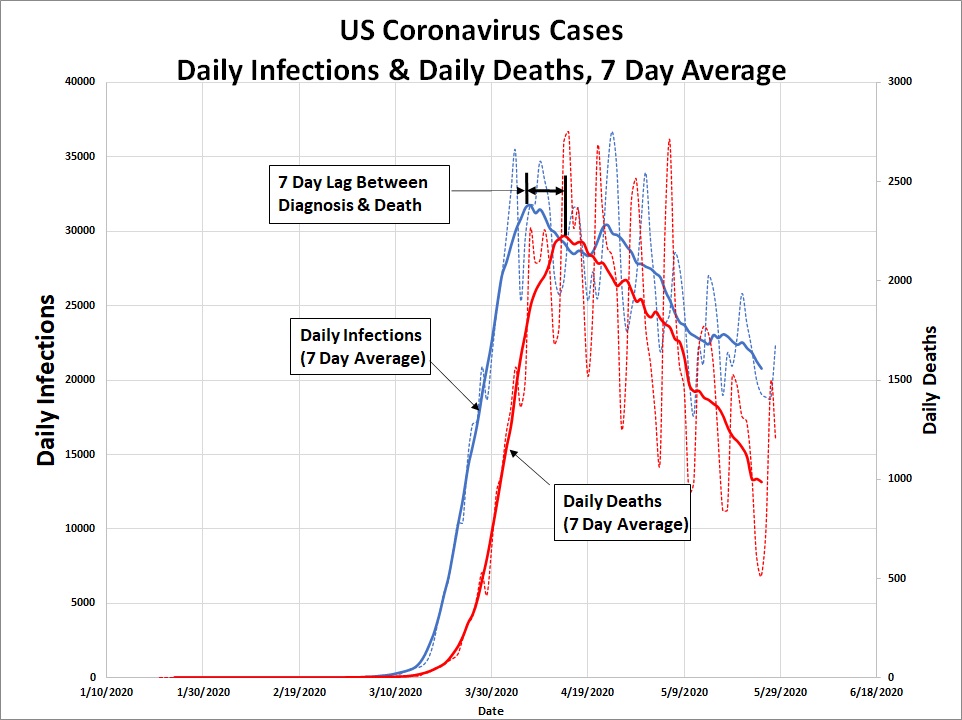 Each day’s infections and/or deaths is the average of that day plus the three previous and three following days. Averaging in this manner eliminates the 7 day cycle, and by averaging in an equal number of days before and days after, the peaks, although smoothed, are not shifted in time.

The difference in the trends can be emphasized by aligning the runup in infections with the runup in deaths. This is done by shifting forward deaths by 7 days: 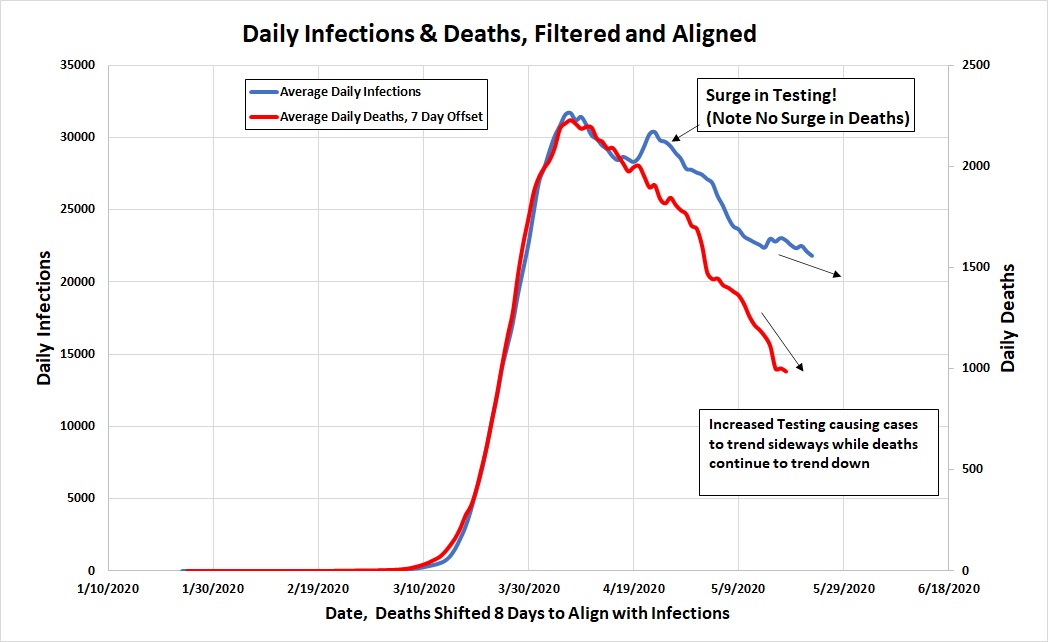 This strongly suggests that if you are going to die from the virus, you will die 7 days after diagnosis, at-least during the initial run-up.  It can also be interpreted as an indication of how fast the US responded to the epidemic, especially when we compare the US to other countries (spoiler alert!).  I walked slowly through the US data, because now I’m just going to throw up a bunch of charts, all using the same 7 day filter and run-up alignment. But, and this is interesting, the shift required to align infections and deaths is different for each country (spoiler alert!). 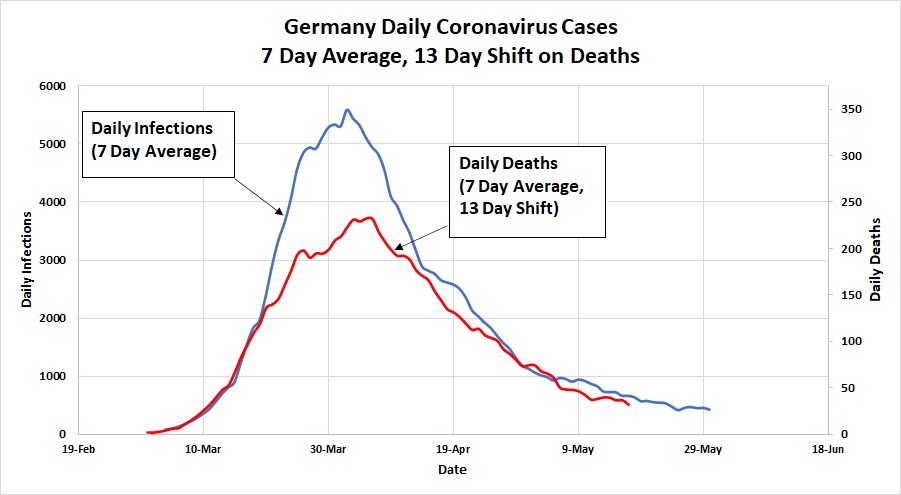 Next up is Italy. Note Italy’s shift between diagnosis and death is only 5 days, indicating they are (were) diagnosing later in the infection cycle than US or Germany. 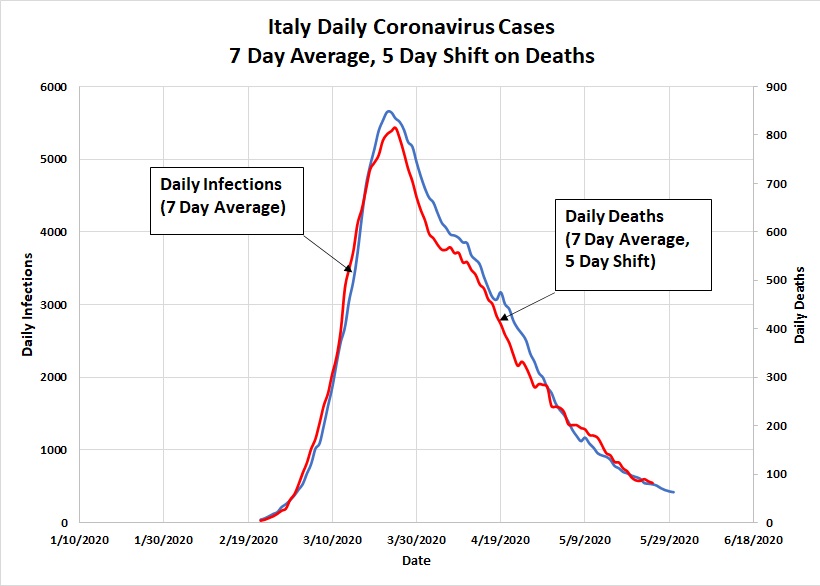 Here is the UK. The UK has only a 3 day shift between diagnosis and death, indicating that by the time you were identified and diagnosed, you didn’t have much time left… 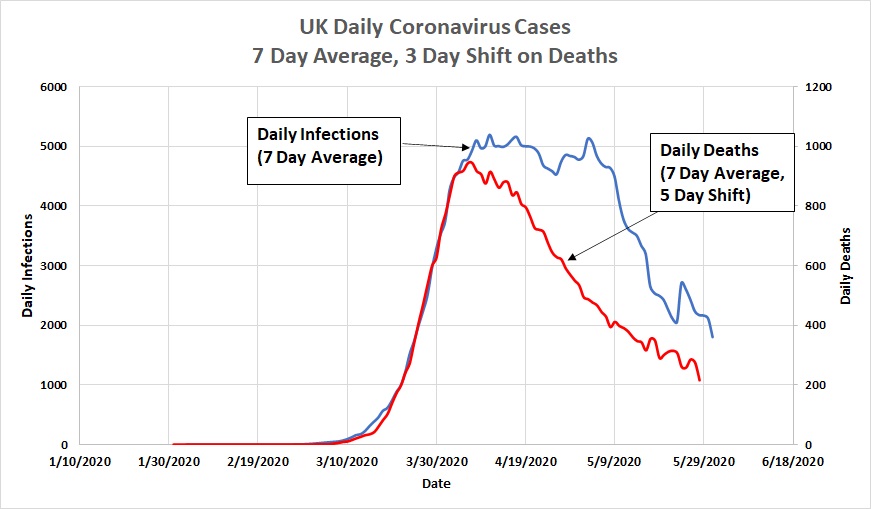 Last for this series is Sweden. Sweden looks distinctly different. If you look at infections, it looks like the pandemic is raging. If you look at deaths, they have 2 weeks until it is over. So virus everywhere, but no-one dying. Quite frankly, it looks like Sweden has achieved heard immunity. Expect the full-court-press on how screwed up Sweden is to continue… 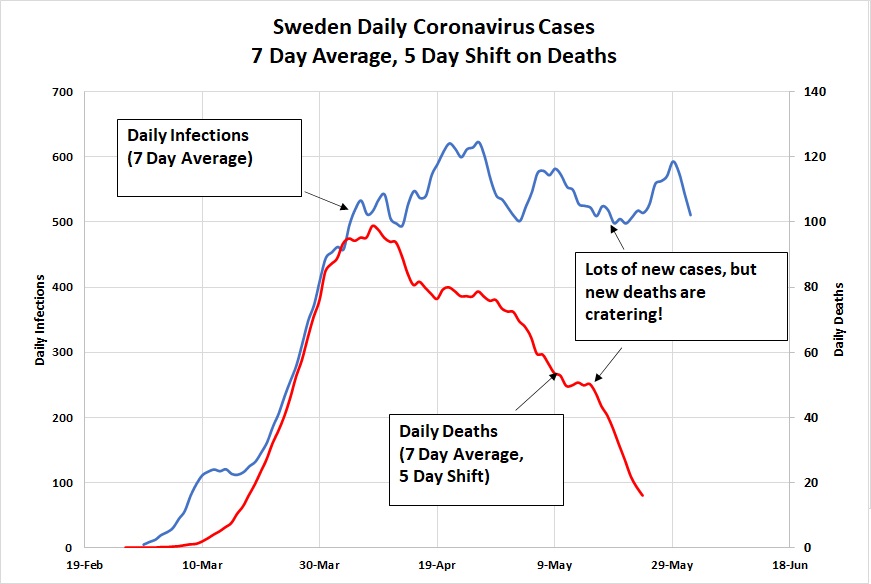 So here is a last chart I did not anticipate until I put this blog together. I was curious about the shift in lead-time between diagnosis and death, and what it meant. So I plotted shift versus mortality (taken directly from the worldometer website), and came up with this: 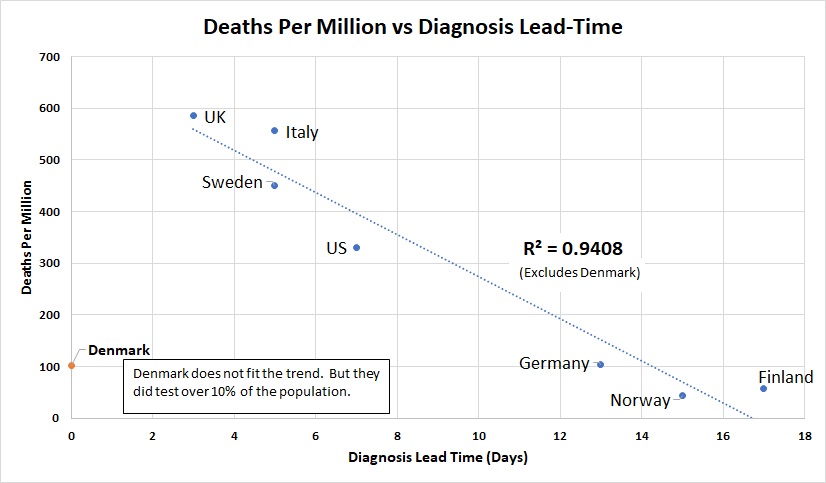 So, what to make of all this? First, if you look at deaths, every country is weeks away from zero or near new deaths. Second, no country showed a double-bump or reversal in deaths (spoke too soon, see updates below). Once they peaked, they went down in a sometimes choppy but otherwise steady fashion.  Third, Sweden looks to have achieved heard immunity.  Either that, or the tests produce alot of false positives.  It would be really interesting to chart tests over time versus positive results over time.  Did Italy and Germany simply start administering fewer tests as their deaths decline?  Or did testing increase and positive results declined?  Lastly, Sweden’s relatively high death rate appears to have nothing to do with their lack of a lock-down, but instead their slow reaction during the run-out.  Had they (or all of us) acted more like Germany and tested everyone at-risk and started their treatment early, the death rates would not be nearly so high.  Of course, Germany did not have a ‘hug a stranger from China’ day, nor did they appear to have a massive influx of people from quarantine zones in China, and instead had to simply deal with people returning from vacation in Italy, so they had a better opportunity to get in front of this, and it looks like they took full advantage of it.

Here are charts for Finland, Norway, and Denmark.  I also added them to Diagnosis Lead Time chart. 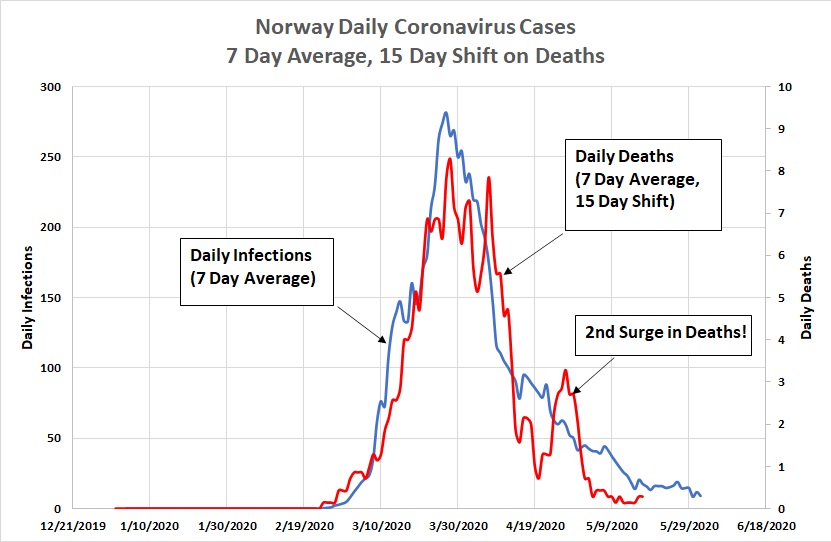 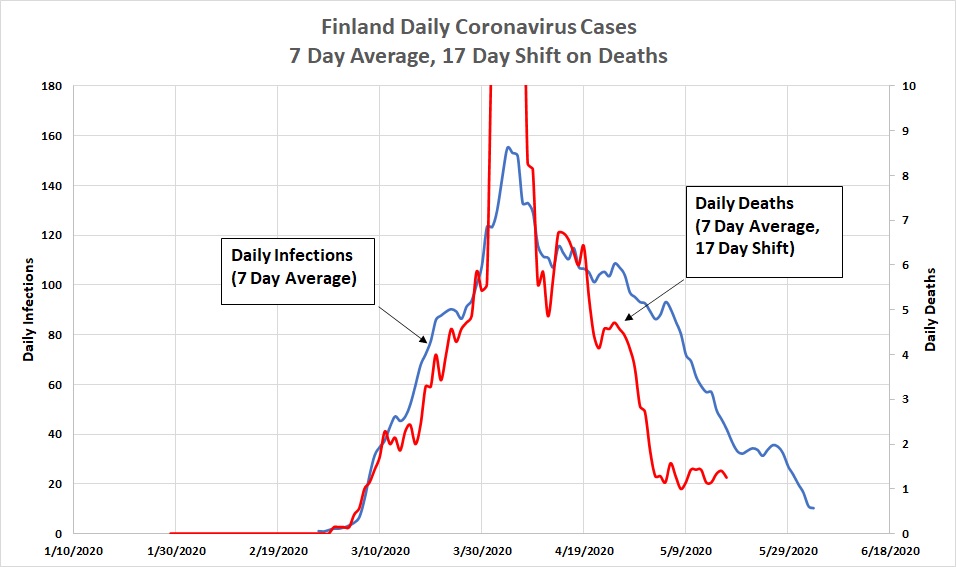 Denmark:  Denmark does not fit the trend.  Their charts indicate a zero-day lag between rise in infections and rise in deaths.  That just seems off, especially since they tested over 10% of their population.  This looks like a reporting peculiarity.  I added them to the lead-time chart, but did not include them in the correlation calculation. 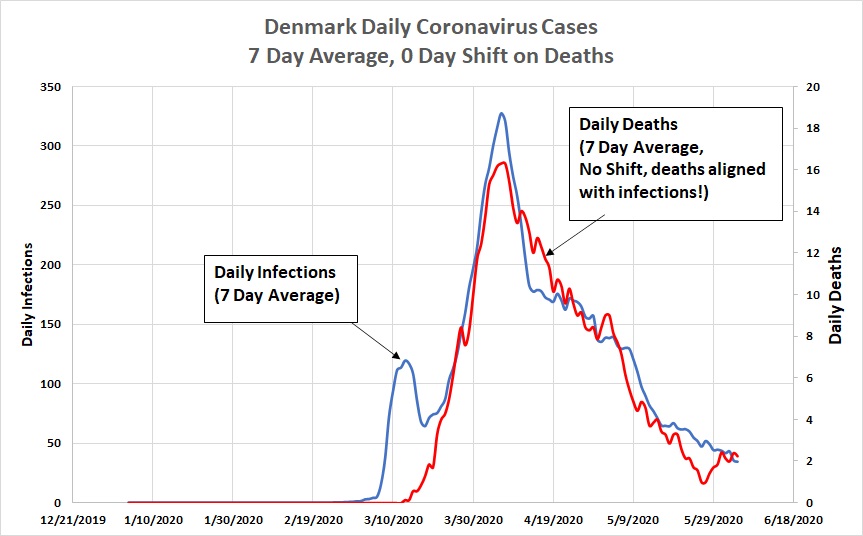