This is an update to a post from two weeks ago where I was comparing coronavirus fatalities to weekly death certificate counts published by the CDC.  For a full explanation of the method, reference the prior post  located here.

Here is an update on the weekly deaths.  As you can see, we are well past the peak in deaths.  In two or three more weeks, we will be at ‘normal’ levels.  (Charts updated for clarity since first post.) 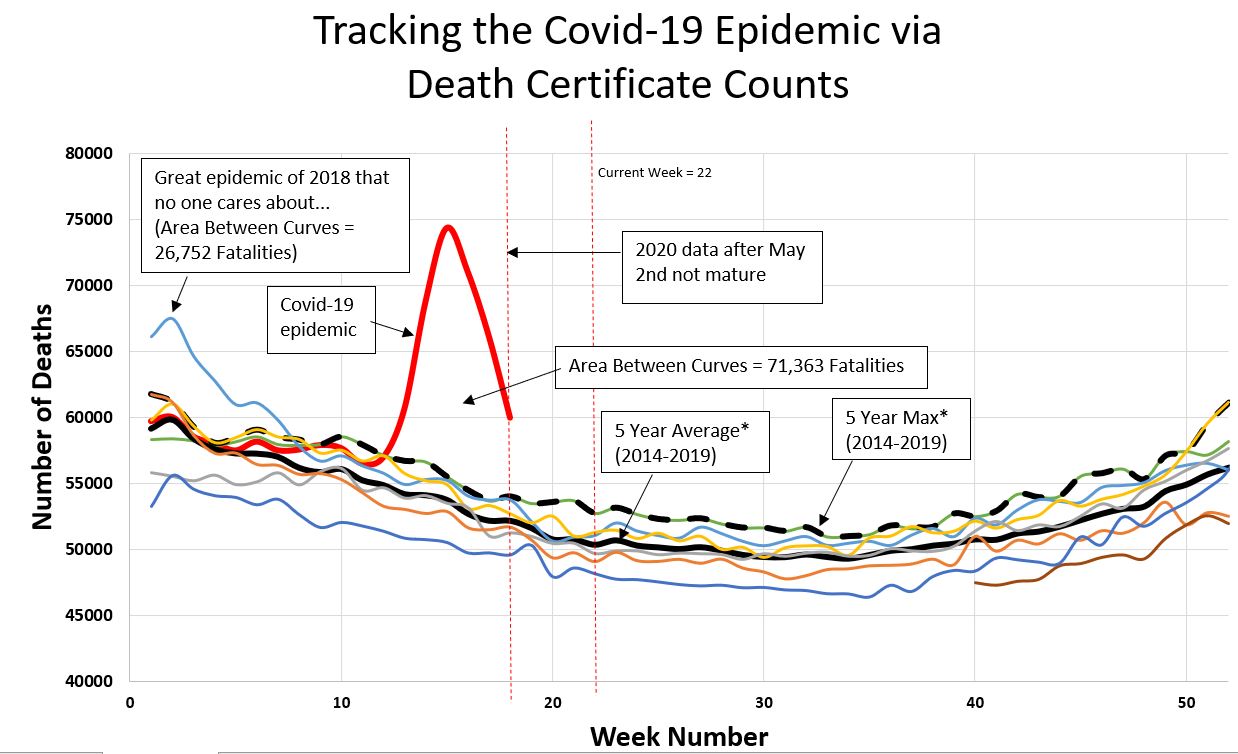 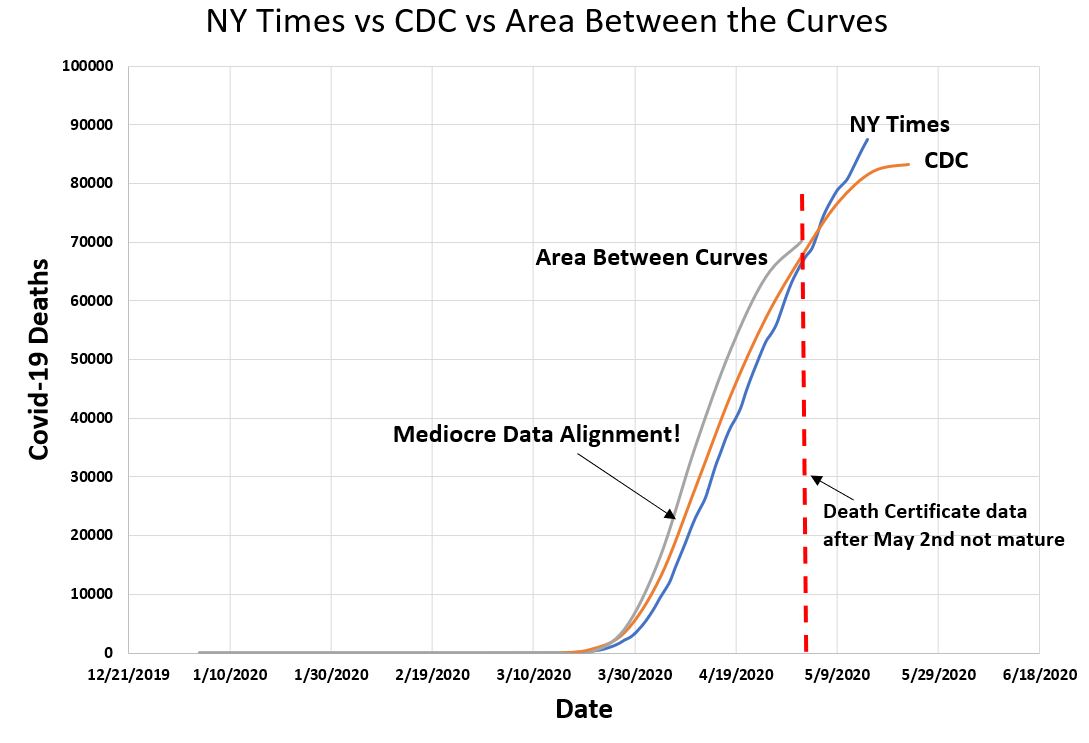 Two weeks ago, these three methods were all in agreement, now they are starting to diverge.  The death certificate tracking now shows the highest death count and the NYT the lowest (on May 2nd).  But, here is where it gets interesting: the NY Times data is supposed to be current, while the CDC Data and the Death Certificate Tracking (‘Area Between the Curves’) both lag.  Unless something radical changes, the death certificate tracking method will grind to a halt in 2-3 weeks (which means now, since the data lags).  Right now it is at 71k.  It doesn’t look like it will hit 100k in 2-3 weeks when it catches up with current NY Times data.  It is completely normal for 50k or so people to die in the US every week.  Needless to say this could get interesting.

As a new addition, I’ve added a couple of extra charts this time.  This first chart is daily new infections and daily new deaths, both from the NY Times database: 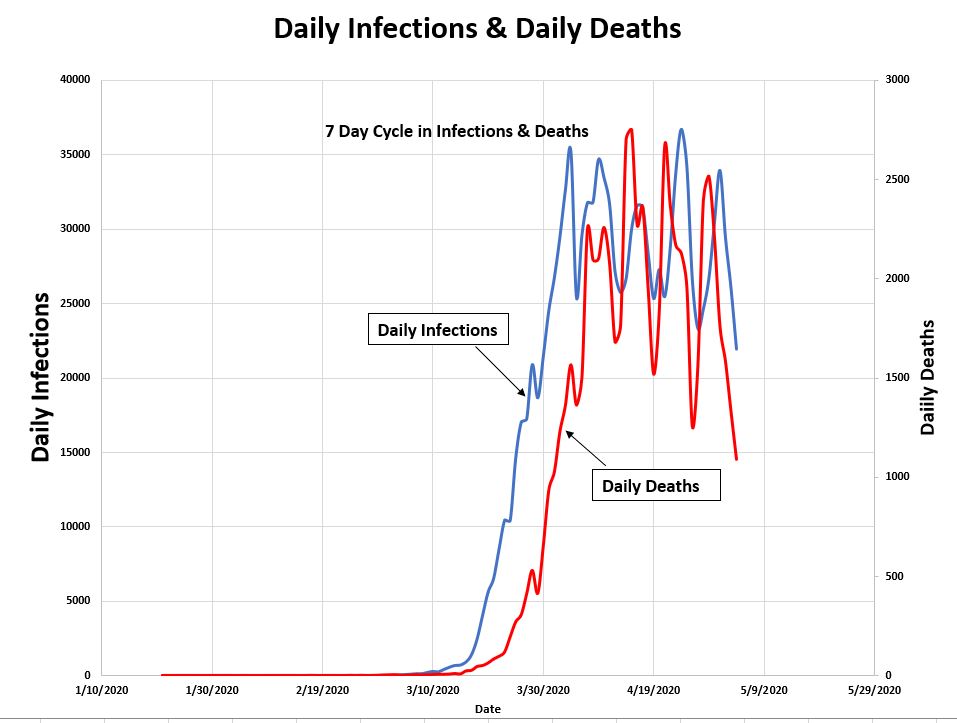 Both data sets show a strong 7 day cycle.  To produce this next plot, I ran both through a 7 day average, then shifted the daily deaths to align the peaks in the data.  The shift is 8 days, strongly suggesting that most people who die will die on average 8 days after diagnosis: 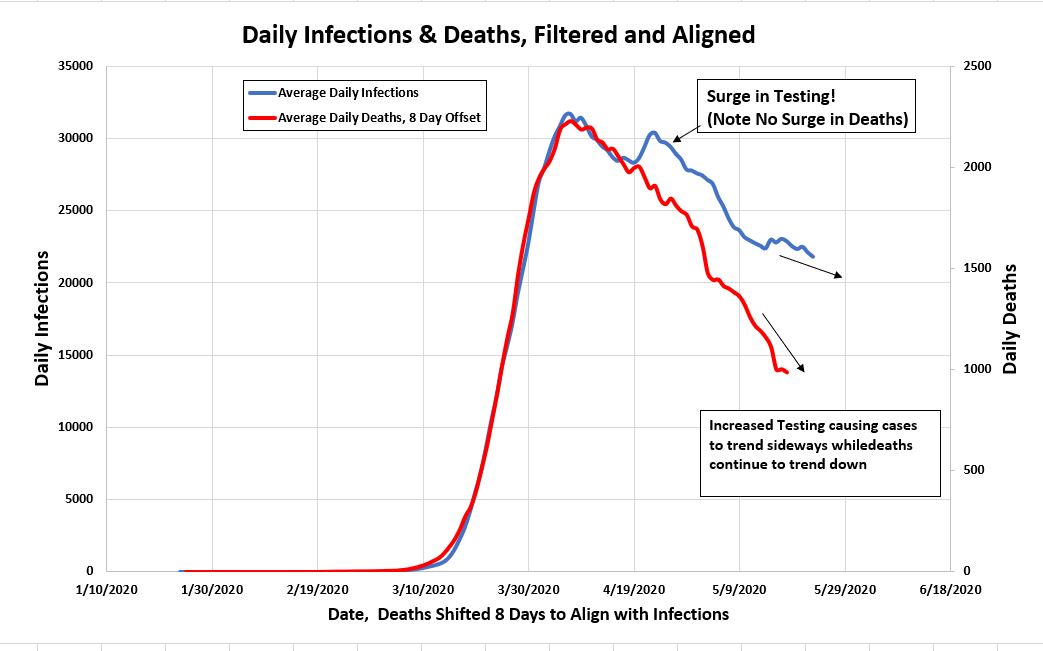 There is some really useful information in this plot.  First, if you look at infections, you see a double-peak indicating a second surge in infections.  But, there is no second surge in deaths.  What that second surge represent is simply increased testing.  Likewise, the infection rate trends sideways over the last couple of weeks while the death rate continues to crash.  The virus isn’t spreading, testing is.  This thing appears to be almost over.

Lastly, I took the ratio of the two curves to produce a mortality curve.  Mortality started out well over 6%, but as we get ahead in testing, the mortality rate goes down.  Right now it is at 4.3% and dropping like a rock: 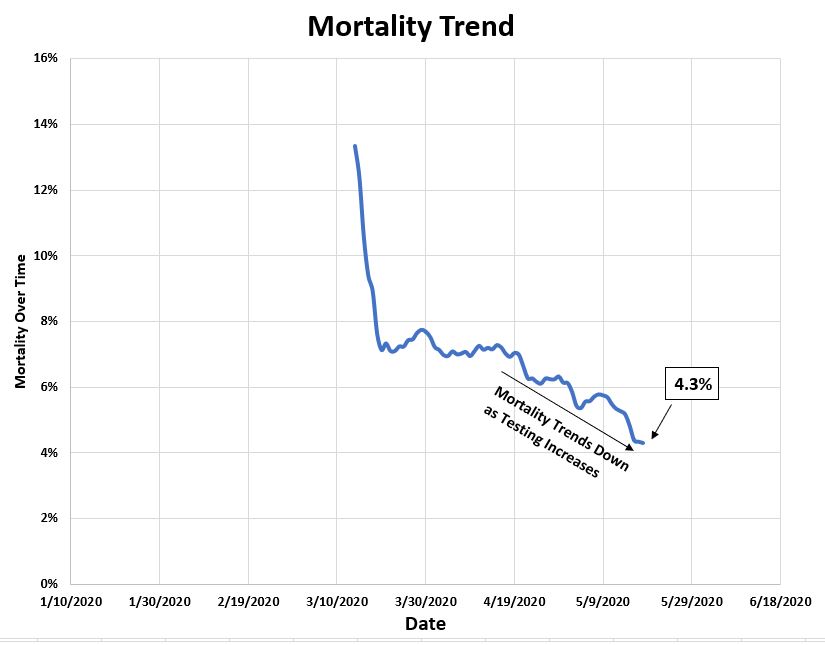 So there you have it.  It may get very interesting if in two weeks NY Times says we are at 120k fatalities, but CDC death certificate counts don’t add up.  I also plan on repeating the mortality graph using a European country with more extensive testing.