Emergency medical technicians disinfect their equipment after delivering a patient to Elmhurst Hospital Center, Saturday, April 4, 2020 in the Queens borough of New York. The new coronavirus causes mild or moderate symptoms for most people, but for some, especially older adults and people with existing health problems, it can cause more severe illness or death. (AP Photo/Mary Altaffer)

There are a lot of sites tracking a lot of statistics about coronavirus, so you’d think this has been all sliced 5 ways from Sunday and there is nothing else to learn.  And you probably think the American press is doing an awesome job too!  Well, that aside, there is a lot to glean from the published statistics that isn’t being reviewed.  So, let’s start with the basics.

This first graph is a widely available statistic: cases per 1M population.  I’m leading with this because the press is doing a good job of making the US look exceptionally bad in its response to the virus, while truth be told we’re are doing better than most nations.  There is a true exception out there that everyone and their brother should be studying, but you’re just going to have to read to the end before I spill the beans on that one (only hint: it isn’t China). 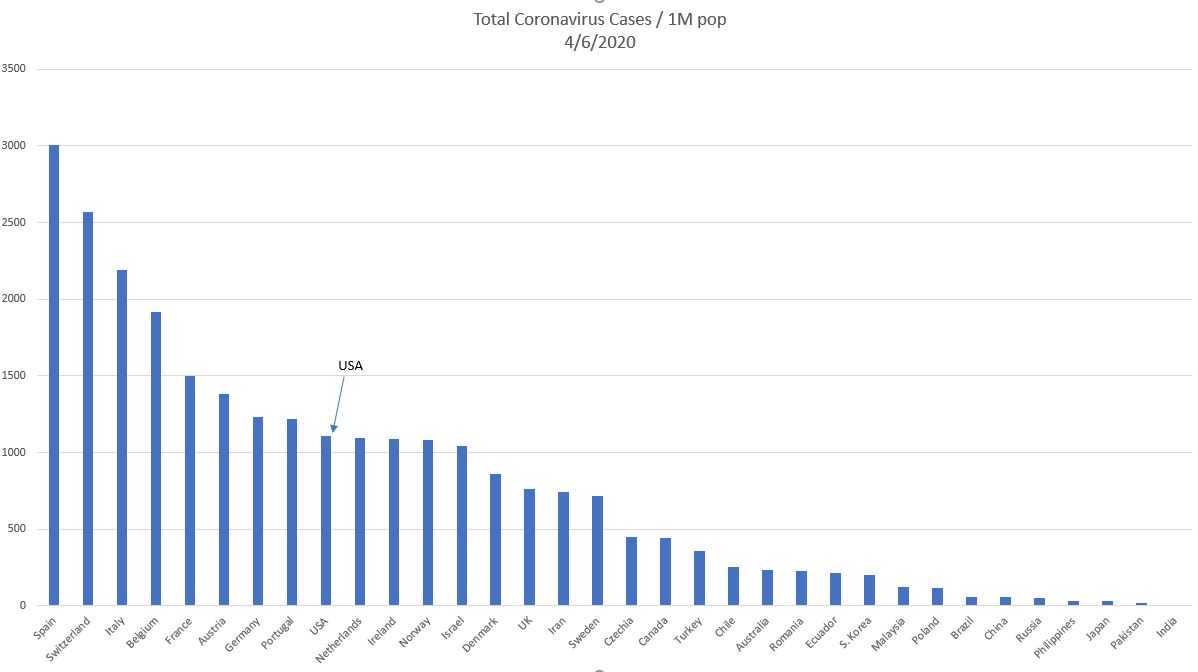 This list changes daily.  But, if the US response is so horrible, where would you rather be?  Germany?  France? Spain?  We’re hardly exceptional, but we are faring better than most.

This next chart I haven’t seen anywhere else, but it plots how many cases are either serious or fatal per 1 million population. This is the chart that rally tells you what is going on.  The problem with plotting cases / 1M population is the extent of testing varies by region.  The more testing performed, the more cases will be found (hopefully before they go critical).  But death and/or being on a ventilator is a constant.  I included serious cases since death / 1M Is widely reported, but including critical cases provides a better indicator of the severity of the virus. 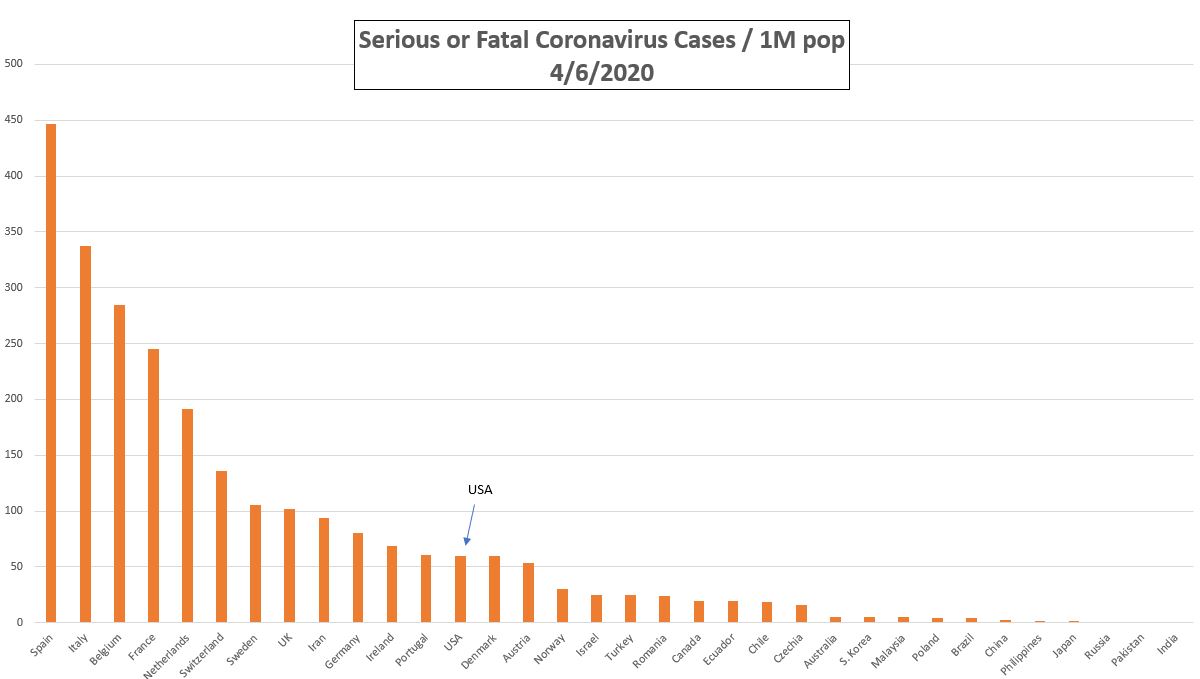 It might seem counter-intuitive, but with increased testing, ideally cases per million would explode while serious or fatal per million would drop. That would mean that the virus is not as deadly as we fear it is. Case-counts climbing isn’t necessarily bad as long as fatalities don’t climb. Unfortunately that hasn’t been working out too well.

This last chart is the one everyone should be looking at: tests performed per confirmed case of the virus.  The metric is pretty critical: if the ratio is 1 or close to one, you are only testing people who already have it and either asked to be tested or were flagged for testing.  You don’t know how many people you are missing because you are only testing sick people.  On this and only this graph, you want as high a score as possible. 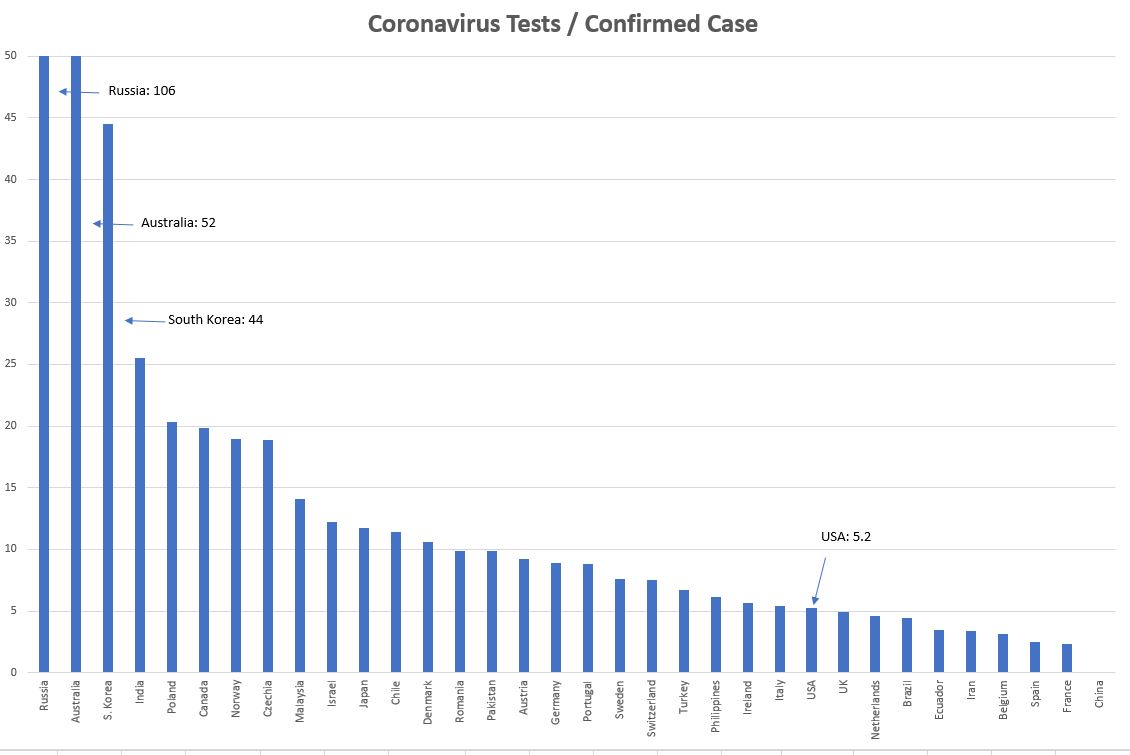 Unfortunately, in this chart, the US clearly lags.  The leaders are Russia and Australia, but their case counts are relatively low and the numbers from Russia are of dubious quality.  South Korea is the country everyone should be looking at.  There is no reason to doubt their numbers (same with Australia) and they are very close to the initial breakout (unlike Australia).  So what were their procedures that allowed them to react so fast?  If I had to guess, I would surmise they believed neither China nor the WHO and assumed the worst from day 1.  But we’d have to hear that from them.  In any event, the more of your population you can clear, the sooner you can return to normal.  On the flip-side, countries like France and Belgium that are very close to one are in pure reaction mode.  That is not where you want to be.  This is also the only graph that tells you what you should be doing: test, test, and test!  If only we had a press not consumed with TDS obsessed with how mean it is to say this virus came from China…

So there you have it.  The response in the US isn’t at the top of the list, but there are very few places I’d rather be right now.  Most of the countries scoring better than the US in any metric haven’t had an outbreak yet.  Hopefully they can keep it contained.  Truth be told, the only place I’d rather be is South Korea.  Their infection rates have crested, and they have had it reasonably contained from day-1.  It’s not that the US is doing bad, on a relative scale we are doing quite well.  Unfortunately, with the House and the press obsessed with Orange-Man-Bad TDS, we are missing an opportunity to learn from the one place that aced the test.  Sadly, we have a press that can’t think from itself and is too often parroting PRC propaganda, and that puts us all at risk.

PS – all stats from worldometer.  Their compilation of statistics looks really good, but I don’t trust them on detail since they quote too much from Chinese authorities.

Corporations are Offering to Pay for People's Abortion Costs...Good