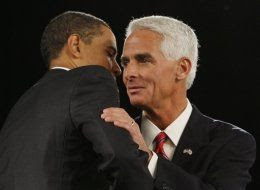 Word is getting out in Democratic circles…Kendrick Meek is toast and if the liberals and Democrats want a friendly voice to win in Florida, it’s all in with Crist.  What I wrote a month ago about Crist’s reaction to the oil spill is, unfortunately, still true.  The only change is that to describe his performance as anemic is too soft a word.  Try pathetic or obsequious.  Better yet, Charlie Crist, in his overweening desire to get elected to the Senate, can now be only described as an Obama toady.

At a time we need a governor looking out for our state, at a time we need a leader who is willing to hold any and all parties feet to the fire, we have Charlie Crist who is totally beholden to the Obama Administration to help secure his political future.  Compare Crist’s performance to Bobby Jindal’s.  Governor Jindal has been on the forefront of defending his state and has not hesitated to criticize the administration.  He literally shamed  the administration to finally begin building the sand berms to block oil from Louisiana wetlands (Mark my words, the EPA’s and Obama’s resistance to this effort to build sand berms by Jindal will judged as one of the most disastrous decisions when the story of the response to this catastrophe is written.  Jindal was right. Obama was horribly wrong.)

Now the oil is coming to our famed “sugar sand” beaches of the Emerald Coast. My sister was at her condo in Destin last night.  As she sat on her porch, she could smell the oil when the wind shifted.  Reports from aircraft say there are thick, heavy tar patches, one up to six miles in length, just south of our shores here in Florida.  Already, the stories and whispers are that Crist’s led preparations, despite a 45 day heads up, are ill-planned, mismanaged and uncoordinated. And so far, Florida is an afterthought to the Feds.  They are playing catch-up in Louisiana and have no time for us. You can run all the ads you want on TV, but in the world of TIVO and DVD’s, as well as a 24 hour news cycle and a live feed of the well spewing millions of gallons of Crude Oil, it is too little too late.  And let’s be honest…once the oil comes ashore in force, we will have no choice but to keep people out of the water and off the beaches for health reasons.  There is no escaping this fact.

This is a disaster that a) occurred in our territorial waters and b) crossed state lines.  That means it met the text book definition of a “Federal Emergency”, in spades.  That meant that Barack Obama was in charge the second that oil well blew up.  He has failed to do what he was elected to do. Take charge and lead.  Word is finally percolating that Obama knew the scale of this disaster from day one.  Now is not the time for formal investigations, but when the time does come to investigate who knew what and when, then this issue should be question number one. If this report proves true, then Obama and company should give serious consideration of doing what LBJ did in 1968; Go quietly into retirement in 2012. If Barack Obama and his Chicago Thug staff were more concerned about shielding their reputation and preserving what little political capital they had left instead of telling the American People the truth, then history’s and America’s judgment should be harsh and quick.  No President should be allowed to be re-elected after so horribly misleading his country.

But back to Charlie Crist.  In order for Crist to get elected, he must have Obama throw Kendrick Meek under the bus. He is totally beholden now to the Obama Whitehouse for his political survival.  His decision to embrace “Porkulus”; His decision to go rouge after it became apparent he would lose to Rubio in the GOP primary; His decision to put all things of public interest subservient to his selfish, enormous ambition to get elected to the U.S. Senate has rendered him impotent to do what Governors Bobby Jindal, Haley Barbour and Bob Riley can do: Hold the Obama’s feet to the fire. For this political sin, there should be no forgiveness.  So when the investigation into Florida’s response to this disaster occurs, hard questions need to be asked of Charlie Crist. Just showing up at Obama’s photo ops in Louisiana is not a disaster response.

By playing Political Whore to Obama’s Political Pimp, Crist has failed his most sacred duty as Governor: Standing up for the best interests the Great State of Florida. For this he needs to be sent to political oblivion in November.