By mmx_flex | Feb 09, 2010 1:53 PM ET
Share Tweet
Share
Tweet
MMX FLEX has identified 50 congresspersons in the United States House of Representatives who must be voted out of office in November because they furthered the radical left wing agenda in 2009 against the interests of their constituents. CLICK HERE FOR THE LIST. We identified these congresspersons based solely on their 2009 voting records and the historical voting patterns of the congressional districts they represent.

The list, which is attached below, comprises those who: (1) voted for at least 2 of 3 bad bills (Stimulus, Cap-and-Trade, and Obamacare) last year, and (2) represent (we are using that term loosely here) a congressional district where McCain received at least 45% of the vote in 2008. A few others (Bean, Driehaus, Foster, Kildee, and McNerney) made the list even though their district bucked historical trend by only supporting McCain with 43 or 44% of the vote (below our 45% threshold).  We included them because they: (1) voted for at least 2 of the 3 bad bills, (2) represent a district that is historically moderate/conservative, and (3) simply “rode the wave” to election in ’08 (current polling data is proving us correct).

MMX FLEX is working with candidates challenging each of the 50 “MUST GO” Congressmen to provide you with the latest news, polling, and analysis throughout the year.  Please leave us your comments about the list and click on the email link below to forward this chart to your friends and family … 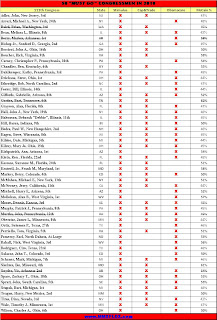