In case you haven’t heard … President Obama’s new budget includes a big increase for the Smithsonian Institution. The museum complex will receive a record-breaking $797.4 million in 2010. Apparently, $761.4 million in 2009 just wasn’t enough. With so much of our money going here, it got us thinking – is the Smithsonian Institute fair and balanced?

To answer to this question, we visited the popular Portraits of the Presidents exhibit at the Smithsonian National Portrait Gallery in downtown Washington and snapped a few pictures. The pictures speak for themselves, and the cliche “one picture is worth a thousand words” definitely applies.

According to the Smithsonian:

“The presidency has been a major focus of American political life … presidential portraits have from the outset attracted popular interest. … It is no surprise, then, that presidential portraiture has been a major collecting concern at the National Portrait Gallery ever since it opened its doors in 1968. … In the selection of portraits on view here, some are more sophisticated and striking [might those be the Democrat presidents??] than others [hmmm … Republican presidents]; some are quite rare or altogether unique; some are calculated to impress us with their gravity while others are warmly intimate. ….”

Really? Here is what we saw.

It is easy to see why the recently unveiled President Clinton portrait has been generating a lot of attention lately. The portrait is quite “striking” … occupying nearly an entire wall from floor to ceiling! 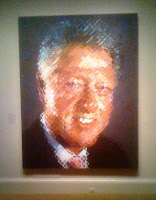 Portraits of Presidents Bush 41 and 43 are standard size and hang together on a wall that adjoins the Clinton wall. Comparison of Presidents Bush and Clinton 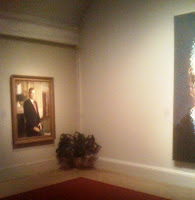 A portrait of President Reagan is standard size and hangs alone on a wall that adjoins the Clinton wall (apologies for the blurry photo).

Comparison of Presidents Reagan and Clinton

President Clinton’s portrait is on the far left (no pun intended) side of the photo.

A portrait of President Carter, like Clinton, occupies nearly an entire wall from floor to ceiling. 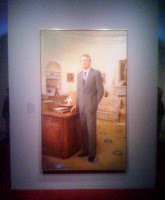 A portrait of President Nixon hangs on the opposite side of the Carter wall. The Nixon portrait is quite small (we were unable to find a smaller presidential portrait in the gallery) and dimly lit. Probably just a coincidence … Or maybe this is what they meant by “warmly intimate.”

Comparison of Presidents Nixon and Carter

The portraits of Presidents Carter and Nixon hang on opposite sides of the same wall.

A portrait of President Kennedy, like Presidents Clinton and Carter, occupies nearly an entire wall from floor to ceiling. The Kennedy portrait is brightly lit even though it is located just a few feet from the Nixon portrait.

A portrait of President Eisenhower is standard size, like fellow Republicans Bush and Reagan, and shares a wall. 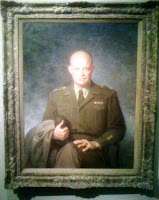 Comparison of Presidents Eisenhower and Kennedy 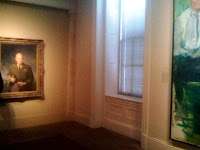 So is the Portraits of the Presidents exhibit at the Smithsonian National Portrait Gallery fair and balanced?  You be the judge.