It's all about AGENDA folks...

In the ‘90s we had the opportunity to defeat the agenda of the Left on the issues and we blew it.

By way of some history, the Clintons came into office looking to remake the country in the image of Barack Obama. Or Hillary Clinton. Or somebody other than The Founders. Their first mistake was HillaryCare. The signature initiative of the Left is, and has been for decades, the nationalization of US health care. The Clintons got their heads handed to them over that issue, and health care was to be only the first shot at the American Dream. In the next election – 1994 – Republicans took the House for the first time in 40 years. And then Hell froze over.

Speaker of the House Newt Gingrich got into a staring match over shutting down the government and lost. They compounded that with forgetting about defeating the Left’s agenda and made it personal with the attempted impeachment of Bill for reasons that had nothing to do with pubic policy (more like pubic policy) and gave the master politician the ammunition he needed to make complete fools of the Republicans while uniting the country (and every Democrat in existence) behind him to fend off a conviction in the US Senate – that was NEVER going to happen anyway – and, more importantly for this discussion, he was able to take the fight away from the agenda. We lost big time and the Left won. We lost the opportunity to drive a stake through the heart of the socialist agenda that President Obama has carried into office and is being substantially more successful with than the Clintons could have ever dreamt.

We have round two with the Obama Administration.

Actually round two consists of two unique battles with the fruitcake wing of the right. Once again we’ve got folks calling for impeachment. I’m not going to address this particular rerun of total foolishness beyond noting that come hell-or-high-water, no matter the charges, you’ve got to be able to count on two thirds of the US Senate voting in favor of a conviction before it’s even rational to discuss it. That will not be happening any time in the next two years even if the President is caught holding meetings with OBL in the basement of the West Wing. Impeachment is a total non-starter.

The second issue does garner some attention and that’s Obama’s birth certificate, or lack thereof. There is a hard core group of folks – starting with people in Hillary’s POTUS campaign – who think Mr. Obama hasn’t met the “natural born citizen” qualification for Presidents as outlined in the Constitution. They are a pretty noisy group. They are also totally unhinged. They’ve seized on a peripheral issue – that incidentally has been decided by both the State of Hawaii and the US Electoral College – that again allows a socialist leaning executive to personalize opposition to his agenda and takes the discussion off the agenda. And let’s be clear, on the agenda we’re winning. We need to keep the focus on the agenda and make the stake stick this time.

Which brings us to today’s exercise in complete stupidity. From the Baltimore Sun…

By Childs Walker, The Baltimore Sun Terrence Lakin is one of the fervent band of Americans who doubt that President Barack Obama was born in the United States.

The catch is that Lakin is an Army lieutenant colonel who refused to report for deployment to Afghanistan because he questions Obama’s credentials to serve as commander in chief.
[…]
Lakin’s stance, made public when he refused to report in April, has made him a hero to the “birther” movement. Birthers say Obama, the first African-American president, was not born in Honolulu in August 1961, and so fails to meet the constitutional requirement that the president be a “natural born citizen.”

1. What part of “Hawaii officials say they have verified Obama’s original 1961 birth certificate” don’t you get?
2. What part of Barack Obama was elected by the Electoral College and was sworn in as the 44th President by Chief Justice John Roberts don’t you get?
3. Assuming you could prove your contention that the President was NOT born in the US and does not meet the Constitutional requirement for a natural born citizen, so what? Exactly what can be done? Don’t even bother saying “impeach him”, see above. 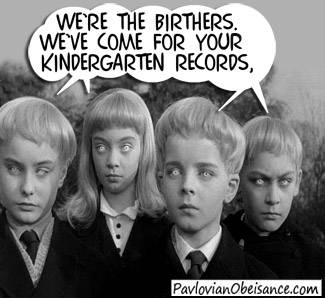 And, with respect to the LtCol, the Army is absolutely doing the right thing. He is utterly wrong, he knows it and he’s simply trying to make a point. He should have a Dishonorable Discharge and prison time to consider just how well he’s made his “point”.