Well gosh.  The current scion of the Kennedy clan – as the Boston Glob [sic] noted – “a son of one of the nation’s most prominent Catholic families” – may just have his [fill in appropriate anatomical reference] in a vise with his Bishop.

OK, so this is what Kennedy said.

“I can’t understand for the life of me how the Catholic Church could be against the biggest social justice issue of our time, where the very dignity of the human person is being respected by the fact that we’re caring and giving health care to the human person – that right now we have 50 million people who are uninsured,” Kennedy said.

He added: “You mean to tell me the Catholic Church is going to be denying those people life-saving health care? I thought they were prolife? If the church is prolife, then they ought to be for health care reform, because it’s going to provide health care that are going to keep people alive.”

So Paddy boy you’ve got an opinion AND a big mouth. And just about as well endowed in the “brains” department as your alcoholic, adulterer, killer, traitor (see letter to the Russians), father. You should give Chris Dodd a call. He probably hasn’t had a decent waitress sandwich for months. I’m sure you could fill in for your dad.

Anyway, apparently the Bishop in RI reads the papers. And, unlike Paddy boy, he understands the concept of a top-down hierarchy like the Catholic Church. And he apparently takes his job seriously. Courtesy of Jill Stanek, this is what Most Rev. Thomas Tobin, Bishop of the Diocese of Providence, RI had to say…

Congressman Patrick Kennedy’s statement about the Catholic Church’s position on health care reform is irresponsible and ignorant of the facts. But the Congressman is correct in stating that “he can’t understand.” He got that part right.

As I wrote to Congressman Kennedy and other members of the Rhode Island Congressional Delegation recently, the Bishops of the United States are indeed in favor of comprehensive health care reform and have been for many years. But we are adamantly opposed to health care legislation that threatens the life of unborn children, requires taxpayers to pay for abortion, rations health care, or compromises the conscience of individuals.

Congressman Kennedy continues to be a disappointment to the Catholic Church and to the citizens of the State of Rhode Island. I believe the Congressman owes us an apology for his irresponsible comments. It is my fervent hope and prayer that he will find a way to provide more effective and morally responsible leadership for our state.

Now let me be clear, I’m not a Catholic and never have been. In various places and in various roles I’ve worked with lots of Catholics and even got to know a couple of Bishops. Bishops are pretty “political” fellas. The “office politics” in any church – Catholic or Protestant – would drive a guy like Donald Trump crazy. Let’s just say that you don’t get to be the pastor of a large Protestant church or a Bishop by shooting your mouth off. I don’t recall EVER seeing a “man of the cloth” make a statement like this. ESPECIALLY one that starts like this one.

Oh, and Bishop, one small point. You’ll never, ever get morally responsible actions from a Kennedy. But I understand you job forces to have hope.

I find it really interesting that the Bishops seem to be finding some folk with fairly large amounts of testosterone lately who are willing to take on people like politicians who are trying to pass for Catholic. Because that’s all Paddy boy is trying to do, without regard to the opinion of the Boston Glob.[sic] (And yes, I think the people who run the Glob are “sick” too.)

WOW. Life just maybe could be getting interesting.

And just so I’m really clear about my “feelings”,

Good Guy. Bishop. Guy with his head screwed on right. 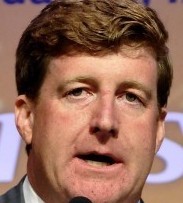 Schmuck. Drunk. Worthless oxygen thief just like his father.
Hey Dad! Pass me one of those BBQ ribs. Thanks. Ohhhhhhhhhhhh. It’s all burned…