4% Mortgages? Mitch, you're a raving idiot.

Note: this started out as a comment to Francis’ diary. I’m not competing with Francis – I may not be the brightest bulb in the box, but I’m not THAT DUMB. 🙂 I’ve turned it into a diary because the chart on CA housing prices didn’t come up in the comment.

Let me be really clear here. Mitch McConnell is a raving idiot if he thinks for one second that government sponsored mortgages at 4% are going to “fix” the current problems in the housing markets.

And to define “clear”:

RAVING: 1. talking wildly; delirious;
4. Usually, ravings.
a. irrational, incoherent talk: Putting him in a straitjacket did not stop his ravings.
b. wildly extravagant or outrageous talk; bombast.

So government sponsored mortgages at 4% is the mantra that will solve the “housing crisis”. Ahhh, no Mr. Minority Leader, it’s not. It’s not even close. There is a solution however. You won’t like the answer, but it’s the only one that WILL work. And it doesn’t require any government action or government programs or one nickle of our tax money to work. It’s called…

The Minority Leader – and a bunch of other people in Washington – seem the think the magic bullet for the housing crisis is lower mortgage rates. After all, goes the “thinking”, if you can reduce your mortgage payment you can keep your house. So let’s make it easy for folks to refinance at lower, read: government subsidized, rates. And with lower rates, people will go back to buying new houses and builders can get back to the business of building again. Right? No. Well, more like Hell NO!

Planning to refinance at 4%? Well, I sure hope you don’t live in CA, AZ, NV, or FL. Or anyplace else that had a significant run-up in values over the past few years.

Today, in order to refinance your home (or buy a new one) you have to be able to verify your income with W2s or tax returns (adjusted gross income thank you). You also have to have a down payment of sorts. For a “conventional” (non-FHA) loan you need at least 8% down. For an FHA it’s 3.5%. The only $0 down loan left in the market is a VA loan (and a federally backed farm/home loan program targeted at specific rural zip codes). If you are looking at a loan of over $435,000 – a jumbo – you better have 30% down. Over $750,000 you’re looking at 40% down. Investment property? 30% to 40% down.

Oh, and one more little detail. If you are refinancing your existing loan and it’s not an FHA or VA streamline (no cash out, just lowering the existing rate), you need at least one appraisal. Over 85% LTV you’re gonna need two appraisals.

Yeah, so what 908? Well, thanks for asking. The following chart was produced by the California Association of Realtors and looks at property values in California. Let me note here that Realtors associations are famous for gilt edged predictions and when you join one you get a lifetime supply of KoolAid. I’ve never read anything in a Realtor’s publication that even approached reality. Remember, these are the folks who invented the phrase “Real estate is the safest investment there is, nobody is making more land.” And who insisted in 2005 and through most of 2006 that there either was no real estate bubble or that the correction was over and prices were going up “next quarter”.

With that said, here’s the chart, courtesy of MIsh’s Global Economic Trend Analysis. 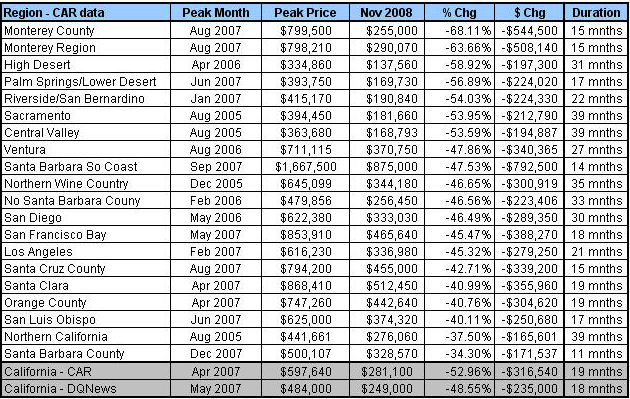 Some points on this data. First, this data is for California but it is representative of price declines in every major RE market. We’ve seen similar numbers in AZ, parts of NV are worse and the best thing that could happen to FL is a huge hurricane. Or several huge hurricanes. Simultaneously.

Second, don’t think for one second that this is anywhere NEAR the bottom. The portfolios of prime Jumbo loans, that’s over $500K with good credit and verifiable income, is going south as we speak. And those Option ARMs I’ve been talking about for over a year? Second quarter of this year and the latest guess is that upwards of 70% of those will go into default. And they are all really high LTV loans.

Third, the sales numbers are smoke and mirrors. In major markets, REO sales account for upwards of 60% of all sales. That’s lenders dumping toxic assets at reduced (and reducing) prices. And the lenders are doing their part to try to prop up the marked price the only way they can, they’re not putting most of their inventory into MLS. There are no hard figures, and not really any good way to come up with them, but the best guesses, IMO, that I’ve seen say that 70% of REO hasn’t seen a listing on MLS yet. That means that the actual housing inventory is significantly understated. Remember the supply and demand curve?

Fourth, “new home sales”. That would be a home you buy from a builder where you are the very first proud owner. All time low in December. Not going to be any better any time soon. THAT is the real indicator of the residential real estate market. Nobody is “moving up” or “downsizing” because they can’t sell their existing house.

So, what about this 4% mortgage thingy? Well, if you’ve got an FHA or VA loan you can probably take advantage of it. You can “streamline” which means you do not need an appraisal (the gov is already on the hook for the loan, if they can lower your payment it technically makes their existing risk lower) you just need to verify your employment and you have to have made your mortgage payments on-time for the last 12 months.

Don’t have an FHA loan? Tough. Gonna need to verify your income (not just your employment), gonna need great credit (700/720+), gonna need to have equity in your home and gonna need to show it with at least one and maybe two appraisals. In other words, if you live in a major RE market you’re not likely to be refinancing anytime soon.

Oh, and one other little nit. You have a $400,000 mortgage on a house worth $250,000. In a real estate market that might see appreciation of any note in another 3 to 5 years and then, it’ll probably be 3% to 5% appreciation. Are you going to refi (assuming you can) an asset that you can only sell at a significant loss or would you be better off walking away and buying a significantly depreciated asset similar to it in three years at a significantly lower price?

Oh, you say, but how about new home purchases. Yep. 4% will help those. As long as the purchaser doesn’t have an existing home to sell. And can verify their income. And have great credit and a down payment.

Bottom line folks, this is the biggest smoke and mirrors show of the century. I would be looking for Bernie Maddoff’s hand in this deal somewhere. Seriously.

The problem is NOT interest rates. It’s value. Period. And until the market deals with value – which is going to mean either a lot of foreclosures or people living where they currently live for the next fifteen years until they have a little bit of equity again, you can make the interest rates for mortgages zero and it’ll have virtually no effect on the housing market.