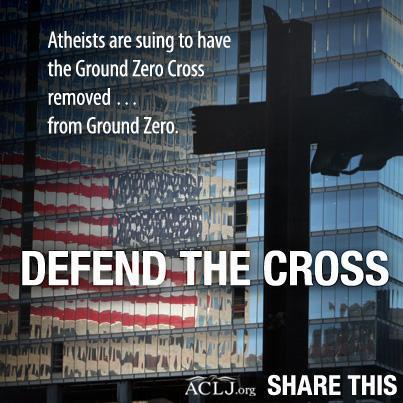 Following a big victory for the Ground Zero Cross earlier this year, where a federal judge threw out an atheist lawsuit to tear down the Cross, angry atheists are now appealing that ruling to a federal appeals court.

The Ground Zero Cross, two intersecting steel beams found in the wreckage of the World Trade Center, became a symbol of hope and healing for first responders on the ground in the wake of the 9/11 terrorist attacks and for thousands of Americans across the nation.

Angry atheists, from the particularly vitriolic American Atheists, demanded that it be torn down.  They attempted to make a federal case of their hurt feelings and lost.

The trial court correctly noted that the Cross was a historic artifact – an actual piece of 9/11 history.  It really meant something to those affected.

The angry atheists’ reaction was unsurprising.  “We are angry that we have to have this fight,” said the president of the group, David Silverman.

Despite their unmitigated rage, placing this Cross in a museum does not violate the Constitution.  As the Supreme Court has repeatedly held that the Constitution’s “goal of avoiding governmental endorsement does not require eradication of all religious symbols in the public realm.”  Simply put, the Constitution is not an atheist manifesto.

The fact is their lawsuit alleges that the mere “existence of the cross” has given them “depression,” “anxiety,” “mental pain and anguish,” and even “headaches.”  For those who claim to have no faith, they are assigning near supernatural qualities to the Cross.

Ironic as it is, their challenge to the Cross, its historic significance, and the real impact it had on thousands of Americans is real.

At the ACLJ, we are preparing to file a critical amicus brief defending the Cross in the Second Circuit Court of Appeals.

Stand with us and sign your name to our brief today.