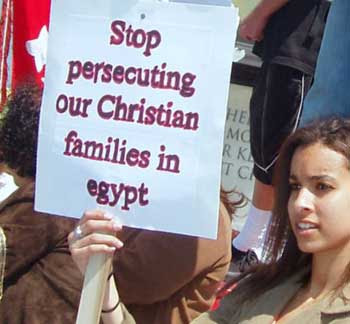 The news coming out of Egypt is overwhelming.  Radical Islamists are targeting Christians.

There are reports that Muslim Brotherhood supporters marked the doors of Christian homes to know which ones to attack during riots.  Christian nuns have been paraded through the streets like prisoners of war – a public degradation of humanity.  Churches have been indiscriminately burned to the ground – one had to cancel its first service in over 1,600 years.  The number of churches attacked in the recent radical Islamic rampage has risen to at least 60 and by some estimates over 100.

Christians are being targeted and killed as the world watches in near silence.  The Washington Times put it bluntly, “[T]his systematic attempt to eradicate Christians along with Jews is nothing less than ethnic cleansing.”

President Obama merely mentioned, “We believe that … the rights of … religious minorities should be respected . . . .”

And “respect” is all our President can muster to urge?

If the open slaughter and abuse of Christians in Egypt doesn’t turn your stomach, boil your blood, and raise to the level of defiant indignation – righteous anger – in your soul, what have we become?

If President Obama refuses to speak out, will you?  If world leaders cower is silence, will you?  If the mainstream media ignores the plight of Egypt’s Christians, will you?

We cannot.  We must not.  We must strive with every fiber of our being to raise the alarm – to stand up with one voice and demand that Christians be protected.

Egypt is home to the largest population of Christians in the Middle East, making up 10% of the population of that nation.  That’s 8 million Christians facing brutal persecution.    If this is happening in broad daylight in Egypt, imagine what happens in nations where there are only a few hundred or thousand Christians.

As Dietrich Bonhoeffer once said, “Silence in the face of evil is itself evil: God will not hold us guiltless. Not to speak is to speak. Not to act is to act.”

Will you be silent?  Will you act?

Join with tens of thousands of others who are speaking out.  Sign the ACLJ’s petition to defend Egypt’s Christians against this radical Islamic persecution.