Julian Assange is Yet Another Reason to #FireSessions

Why would Trump’s AG keep a lid on an Obama/Clinton era scandal? 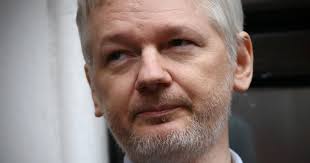 The world should hear the real story behind Julian Assange’s extended stay at the Ecuadorian embassy in London. (CARL COURT / GETTY)

Attorney General Jeff Sessions has been holding back for more than a year now on exposing a scandal of epic proportions that would largely vindicate the arguments which President Trump (R-USA) has consistently been making about the DOJ.

Further, it’s not at all clear why Sessions (?-??) has been forsaking Julian Assange, seemingly in order to protect Obama, Holder, Hillary Clinton and probably Loretta Lynch, amongst others. As many know, Assange founded the whistle blowing organization WikiLeaks and he was a consistent and persistent thorn in the sides of George W. Bush, Dick Cheney, Barack Obama and Hillary Clinton when they were respectively in office. Then, during the 2016 presidential election, WikiLeaks released tens of thousands of emails from the account of Hillary’s campaign manager John Podesta, earning Assange new found respect from conservatives and most likely additional ire from the Clintons and their fellow Democrats.

For decades the DOJ has prosecuted whistleblowers like Assange and WikiLeaks due to concerns they would run afoul of the First Amendment. Not to be stymied by that pesky Constitution though, the apparently even less scrupulous Obama Justice Department tried to go after Assange and WikiLeaks outside of the courtroom and perhaps outside of the law itself. And the Obama administration took some friendly fire from the media for its antics:

In addition to the above though, many believe (including me) that the Justice Department under then-Attorney General Eric Holder and the State Department, which had found itself mired in controversy following major releases from WikiLeaks detailing diplomatic shenanigans under Secretary Clinton, had Assange falsely accused of rape in Sweden so that he could be arrested in the EU, with the likely goal of his eventual extradition to Washington where he would face a show trial for bogus espionage charges brought by the Obama DOJ.

The logistics would have been complicated, but basically, few EU countries will extradite anyone to face life in prison with the possibility of an extrajudicial killing, and espionage is a capital offense in the United States. So, the UK, where Assange was at the time, would not have publicly handed him over to the Obama administration directly. However, Sweden could have under the terms of its extradition treaty with America. But first, the UK would have had to extradite him to Sweden while no such capital offense or corresponding extradition request by the United States was pending.

Tellingly, the U.S. DOJ has never formally charged Assange, and while anyone being charged with a crime in the U.S. has a Sixth Amendment right to confront their accuser, the alleged victims in the Swedish case against Assange have only ever been identified by initials and have never spoken publicly. Further, that case was eventually dropped after Assange was granted political asylum by the Ecuadorian government in its embassy. Then, last year, Sweden formally rescinded its arrest warrant. However, while Sweden theoretically operates under the same strictures from the EU Human Rights Court, it may have been easier under the terms of its extradition treaty with America for it to handover Assange while no such capital offense or corresponding extradition request by the United States was pending. But first, the UK would have to extradite him to Sweden. Assange now faces bail-jumping charges from the UK government of Prime Minister Theresa May, who herself has been a vocal critic of President Trump.

Long story short though, pulling the lid off of all of this now would be devastating for the Obama holdovers in the DOJ and the Clinton holdovers in the State Department as well as to Trump’s critics in the UK government. It would also validate what President Trump has been saying about the “rigged” justice system in America, which appears to have been trying to bring down his administration since before he even took office.

But vindicating President Trump, exposing the likely crimes of his predecessors and freeing Assange and other political prisoners certainly doesn’t appear to be on the agenda for AG Sessions. Maybe that’s part of the reason over 4,800 Americans have signed this WhiteHouse.gov petition here to fire him. Again, that petition is here, :).

And time is of the essence for Assange, whose internet and other communications inside the embassy were cut off 7 weeks ago by the Ecuadorian government after he publicly expressed skepticism about the British government’s theory that Moscow was behind the deaths of a former Russian spy and his daughter on English soil. Ecuador has said that Assange’s social media posts were causing the country to have diplomatic issues and that Assange had violated an agreement he made not to disseminate material which would complicate its international relations.

Over the weekend, several independent outlets reported on a Spanish-language interview given by the Ecuadorian foreign minister in which the South American country’s government apparently said that it looked forward to negotiating with the UK to bring an end to the standoff that has kept Assange trapped in its embassy. While the precise meaning of this statement wasn’t clear, many have been speculating that left-leaning Ecuador has grown weary of sheltering right-leaning Assange and that its new president is getting ready to evict him.

However, any move by Ecuador to force Assange out would contradict the word of its former president Rafael Correa, whose officials had said that he could stay “However long it takes. Eight years. Two centuries,” when the former leader first granted him asylum citing that he “didn’t have the basic guarantees for a fair trial. His life was in danger.” And, just a little while ago, rather than turn Assange in, the South American nation, which insists that it will not by bullied by other sovereign powers, tried to appoint Assange to its diplomatic corps in an attempt to extend him diplomatic immunity. But under normal international custom, the host country has the right to refuse such appointments, which the UK did in his case.

In another recent effort to help Assange, PETA board member, model, and former Playboy Playmate and Bay Watch star Pamela Anderson wrote an open letter, available here to musician Kanye West, asking him to speak on Assange’s behalf. Assange and Anderson have been rumored to be dating since 2014.

You can help Assange by donating to WikiLeaks here or by signing the aforementioned WhiteHouse.gov petition to replace Attorney General Sessions here.

At the time of publication, Anderson had not returned a request for comment about Assange’s situation, her letter or if she has any indication as to whether West has read her message. Similarly, neither the Ecuadorian government of President Lenin Moreno nor the UK government of Theresa May returned requests for comment on the status of any negotiations regarding Assange and their intentions toward him and his situation at this point. Finally, neither a White House DOJ spokesperson nor the current U.S. State Department returned requests for comment as to whether they would be willing to come forward with evidence of past malfeasance on the part of previous administrations regarding Assange’s situation.

The author, Marty Gottesfeld, is an Obama-era political prisoner. FreeMartyG is currently conducting a fundraiser to help keep Marty’s phone account funded and the articles flowing. You can donate at FreeMartyG.com.

This article originally appeared at https://freemartyg.com/julian-assange-is-yet-another-reason-to-firesessions