We need a new AG… 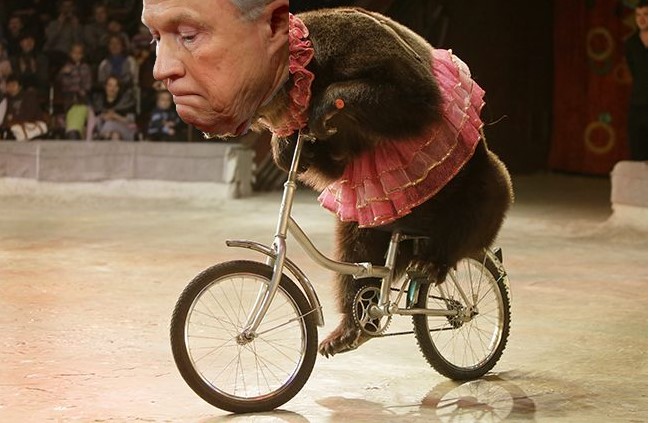 Click here to sign a WhiteHouse.gov petition to help give President Trump the political backing to fire Attorney General Jefferson Beauregard Sessions. The reasons are many and the time is here. With the midterm elections fast approaching and the DOJ stonewalling Congressional subpoenas, it may be now or never to get rid of the worst Republican attorney general in recent memory, if not in American history.

Firing Sessions any closer to election day would likely be problematic, and if Republicans were to lose even 2 Senate seats then it may become impossible to confirm a new attorney general who’s not just as bad if not worse. Further, since Sessions has recused himself from the Russia witchhunt, I meant “investigation,” there’d be little that the Democrats and their pet special prosecutor Robert Mueller can say or do about it. Not that it would matter anyways, as they’ve shown their true colors.

And so has Sessions. He’s had a year and so far there’s no sign that any of the corrupt Clinton crooks will be donning orange jumpsuits. Apparently trampling on states’ rights in a misguided 1-man crusade against regulating cannabis was a higher priority for him, even if it was going to cost his party big in November. Thankfully though, President Trump overruled him on that. Now according to Representative Devin Nunes, who wrote the blockbuster FISA memo naming Comey, McCabe and Deputy Attorney General Rod Rosenstein as having used the bogus Steele dossier to wiretap the Trump campaign during the 2016 election, the department which Sessions currently heads like an absentee deadbeat dad is likely in contempt of Congress for failing to comply with Congressional subpoenas.

Meanwhile, the word “subpoena” literally means “under penalty.” But there are rarely ever any penalties for the DOJ – especially for ignoring subpoenas. They and their cadre of corrupt judges have seen to that.

Further, one doesn’t need to be a Constitutional scholar to understand that the DOJ is really making a grab for absolute power. They don’t want to answer to elected representatives, whether they are the President of the United States or the Congress, who are both supposed to exercise Article II oversight over the Justice Department. And many federal judges are in on it.

Marty is an Obama-era political prisoner. To donate to support him or follow him on social media through his unjust incarceration please go to FreeMartyG.com.

This article originally appeared at https://freemartyg.com/click-here-if-jeff-session-must-go

Blind Squirrel Finds Acorn: Bill Maher Slams Cancel Culture: 'It's Real, It's Insane, and It's Coming to a Neighborhood Near You'
Mike Miller