And am I allowed to say “yes”?

What does Federal Magistrate Judge Marianne Bowler have in common in real life with Leonardo DiCaprio’s fictional character in Catch Me if You Can? (FreeMartyG)

Take a good look at the federal search warrant here and note the date of September 29, 2014 hand-printed on it by the issuing magistrate, Marianne Bowler: 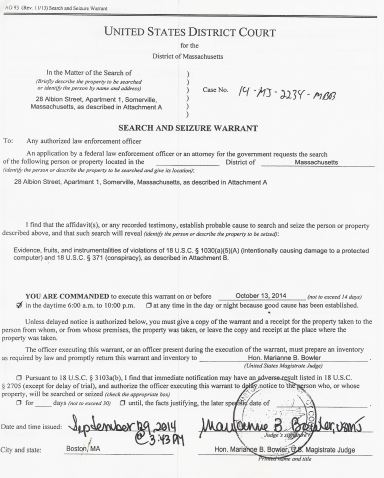 Ok, now here is the lie-filled application for that same warrant which we received from the prosecution during discovery and which was filed by former Federal Prosecutor Adam Bookbinder and FBI agent as well as former heavy weight wrestling champion of his own dorm room (and probably not much else) Michael Tunick, who you can read about here: 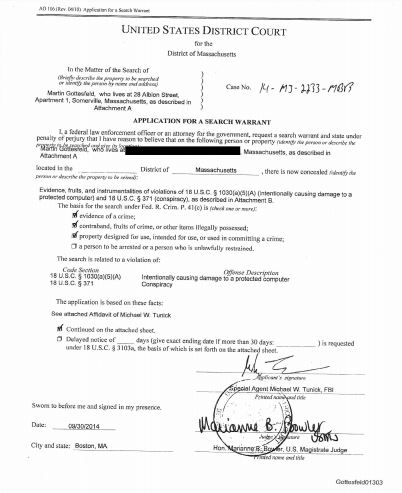 Now, it would have been bad enough for the government and Magistrate Judge Bowler to just admit that the warrant was rubber stamped with no real application filed until after she had issued it. That would had been a violation of the 4th Amendment and likely led to the dismissal of the case, which you can learn more about by reading the following article from a December print edition of The New American magazine called, “Save a Girl’s Life, Get Treated Worse Than a Terrorist” available in full by courtesy of The New American magazine on our website here or by watching this RT clip here:

However, apparently making such an admission wasn’t on anybody’s agenda at the kangaroo federal courthouse in Boston.

And as I had predicted earlier in the week here, instead, a new version of the application surfaced at a hearing yesterday in the hands of a different judge, Nathaniel M. Gorton. On this new revision, Judge Bowler changed the date to the 29th and initialed the change. As I had also predicted, I am now told that the federal court’s docketing system also now reflects that this new version was supposedly filed on the 29th as well – even though the prosecutor told the court that he had never seen it before and it most certainly is not the version which we were given during discovery.

I am not making this stuff up, though for America’s sake, I wish that I was.

Further, I am not able to show you the new version because it’s still under seal and thanks to a previous order by Judge Bowler, which you can read about it at Red State here, I am forbidden from having copies of my own discovery… for what was supposed to be a speedy and public trial more than 2 years and at least 2 sealed dockets ago.

Added to this, Judge Bowler is far from a disinterested party in this matter, as you can read in the previously mentioned article by The New American or in this Infowars article here. Therefore she almost certainly shouldn’t have been signing off on that warrant in the first place.

Meanwhile, there’s a young woman who’s now 19, but still in a wheelchair from 5 years ago when she was unlawfully ripped from her parents, denied due process, tortured and her family was put under an unconstitutional gag too. And her captors aren’t facing any kind of justice at all.

Marty Gottesfeld is an Obama-era political prisoner. You can donate to his defense fund at FreeMartyG.com.