A growing number of people view me (left) and Justina Pelletier (center and right) as current and past political prisoners of Harvard University, respectively. (Photos courtesy of Gottesfeld and Pelletier families)

In case you missed it, Harvard has been busy quietly fighting Trump’s plan to tax the money it earns by throwing around its $36 billion political muscle. Sorry, I mean to say endowment.

Why quietly? Well, as the normally Snowflake-friendly Boston Globe pointed out, otherwise the fight would force Harvard “into the awkward position” of “publicly defending” its “enormous wealth at a time of rising student debts and soaring tuitions.”

As the Globe also highlighted, “Institutions used to being heard, such as Harvard, are at a disadvantage with this White House because, unlike past administrations, President Trump has largely shunned the school’s graduates for top posts.”

So, let me play the world’s smallest violin for Snowflake University President Drew Faust, as I join the Globe in quoting her when she calls the attacks unnecessary because Harvard’s endowment “is not locked away in some chest,” but rather, “at work in the world.”

Newsflash Drew: A lot of people and organizations have investments “at work in the world” but still pay 15 percent capital gains tax, way more than the 1.4 percent being proposed for Harvard’s annual earnings. On top of that, unlike Snowflake U, the vast majority of those investors aren’t using their proceeds to lobby in D.C., and they certainly aren’t keeping political prisoners like Harvard has been, let alone on the taxpayers’ dime.

Such political prisoners include myself and Justina Pelletier. For more background on our cases, please see this article by Michelle Malkin, this one by Infowars, or this one by The New American. Those who prefer video can see this Infowars clip or the footage below of Justina pleading with former Massachusetts governor (and Harvard alum) Deval Patrick to let her go home:

And keeping political prisoners isn’t cheap. Estimates of the tax funds paid to Harvard-affiliated Boston Children’s Hospital (BCH) for medically kidnapping, paralyzing and torturing Justina range from $500,000 into the millions and those estimates don’t count all of the tax money wasted by various government agencies and the courts by playing defense and shielding Snowflake U from melting under the heat of the media spotlight. Maybe instead those costs should be deducted from the $225 million BCH receives every year from the federal government or from its $2 billion in other untaxed assets.

As for me, the U.S. marshals in the District of Massachusetts have been paying the astonishingly corruptPlymouth County Sheriff Joseph McDonald Jr. over $100/day to hold me because I defied Harvard by trying to save Justina’s life. Maybe they could send the bill to Harvard’s 54-person panel on “inclusion and belonging,” and perhaps, if they weren’t too busy dealing with a multitude of other scandals, they would. If they did, it would be another first for the university, making it the only school in America to pay for keeping a political prisoner. 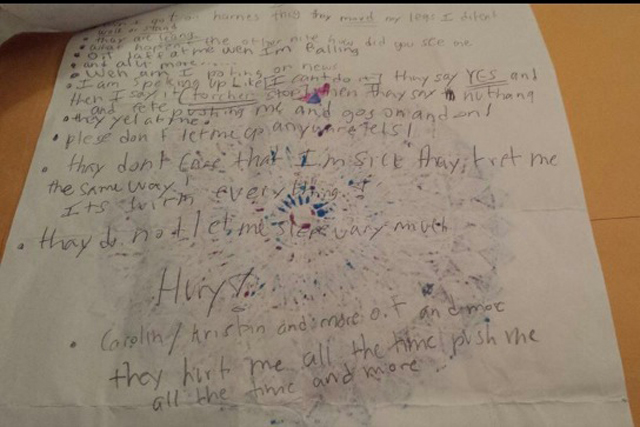 “They hurt me all the time” – Justina Pelletier’s secret note that she smuggled to her family while she was held against her will in a Harvard-affiliated psych ward.

So, how would the 54-snowflake committee feel about its precious university denying that learning-challenged child her federally guaranteed right to receive an education in the least restrictive setting possible, and thereby causing her to fall years behind her classmates? Now that can’t be very PC at all. Nor is it very “inclusive.”

Which gives me an idea. Maybe we’re going about this the wrong way. Perhaps, if we taxed Harvard on its hypocrisy instead of its endowment, we could take care of that rising student debt and those soaring tuition rates. What do you think?