Media: Trump Didn't Listen To "Experts" About COVID-19. But What Were The "Experts" Saying Then?

Joe Scarborough launched the Media’s most recent attempt to exonerate China and place the blame for the Wuhan Coronavirus pandemic exclusively at Donald Trump’s feet by claiming that “everyone” knew about COVID-19 way back in January, except Trump.

According to Scarborough, experts were warning the Trump Administration about the epidemic in Wuhan, only to be ignored and to have Trump downplay the scope of the crisis.

Now, this is not a “misleading” claim. This is what is called a deliberate, conscious, shameless and malicious lie by an unrepentant mendacious low-rent hack.

As any honest observer – which neatly excludes most national level journalists today – would note, Trump’s optimistic takes were in line with expert opinion.

As Dr. Deborah Birx, a bona fide top class expert, recently pointed out, this ignores how China’s covering up, lying and hiding the information on the virus affected the entire world and the response because the false numbers being released by China in January made it look like SARS. As late as January 14, they were saying the virus was not human-to-human contagious.

And, as late as January 26, Dr. Anthony Fauci was telling The CATS Roundtable that, “The American people should not be worried or frightened by this. It’s a very, very low risk to the United States … It isn’t something that the American public needs to worry about or be frightened about.” And weeks later, on February 18th, Fauci was quoted in a Yahoo article as saying the danger from the coronavirus was “miniscule.”

In other words, expert opinion in the United States, at the WHO, and the general consensus around the world in the medical community was that the Wuhan Virus was similar in behavior to SARS. The problem was that this was wrong – because China lied, and their false numbers hid the fact that this was a virus three times as contagious as influenza with a virtually unheard of 14 day incubation period.

This latest effort by Scarborough of course follows articles by CNN, the New York Times and other Left-Wing “news” outlets attempting to recast general non-specific risk assessments of a pandemic into specific actionable intelligence to somehow “prove” that Donald Trump was informed but failed to act in time to confront the Wuhan Coronavirus threat.

NOTE: The media attempted a similar tactic against George W. Bush in the aftermath of 9/11; “news” outlets – led by the New York Times – tried to argue that intelligence assessments concluding the obvious, that Usama Bin Laden wanted to attack the United States was specific and actionable enough to tell the Bush Administration that a bunch of mass-murdering thugs were planning to crash planes into high profile buildings in September of 2001.

Unfortunately for Scarborough and other low-life hacks like Chuck Todd, the Internet is forever; 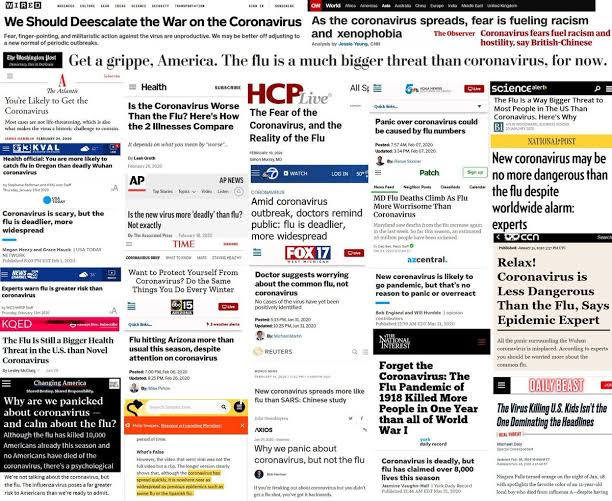 What is particularly galling is that this is after the media collectively furled the lips, thrust their noses in the air and loudly decried Trump as racist and xenophobic for banning travel from China on January 31st.

And guess who were cited by all these outlets to support their charges of racism and xenophobia when the Trump Administration acted?

You guessed it; “experts” i.e. the “experts”, we’re now told, who knew all about how virulent and dangerous the Wuhan Coronavirus was, and were supposedly, “ignored” by Trump.

Witness this very very badly aged article (published on January 31st) by partisan hack reporter Nick Robins-Early in the partisan hack Huffington Post hailing China and attacking Tom Cotton for “spread[ing] misinformation and panic in a weeks-long meltdown over the disease.” As the folks over at Twitchy have noted, this article should be in the hall of fame sheer wrongness at every turn, and how eerily correct Senator Cotton turned out to be.

Clearly, they had no idea what was going on. And neither did the HuffPo.

So, I began wondering, did the experts really know what was happening in Wuhan in China? How many of them contacted the Trump Administration to warn the President about COVID-19 as Scarborough says they did.

And how many denounced and attacked his decision to shut down travel from China? Perhaps we can found out who, like Michael Mina and Tara Kirk Sell, we should not be listening to.

Any help would be appreciated.