Cui Bono?: When "Attacks" And "Death Threats" Are ... Convenient.

By Martin Knight | Mar 26, 2010 8:11 AM ET
Share Tweet
Share
Tweet
If Democrats really want the so-called “Death Threats” and “attacks” on their offices to end, they should simply pick up the phone and call Tim Kaine.

Kevin Jackson just leaped to the top of my list of favorite people with this beautiful performance he delivered as he faced off against David Shuster on MSNBC. While David Frum and other PCCs (“Polite Company Conservatives”) would have smiled and nodded politely and unreservedly joined Shuster in denouncing those dastardly conservative extremists for attacking a Civil Rights icon like John Lewis, the supposedly unprecedented portraying of Obama as Hitler and Tea Partiers going on a wave of destruction on Democrat offices across the nation, Kevin Jackson challenged Shuster’s (and the Left-Wing MSM’s) presumption, absent any tangible evidence, that these amazingly convenient stories of Republican violence were true. 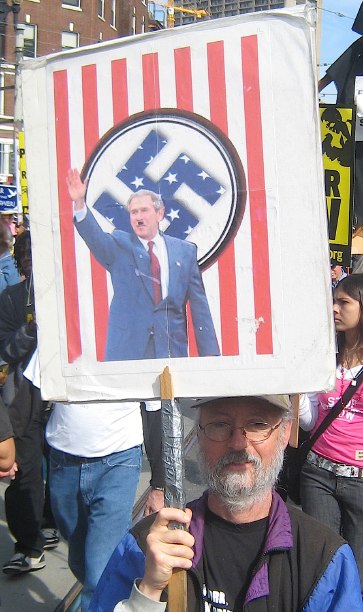 Even more gratifying was that Shuster was obviously unprepared for Kevin’s outright rejection of the veracity of these incidents as reported by the Democrats and was left stuttering at Jackson’s pointing out that these “attacks” is far more likely to be the work of Democratic operatives than Republicans. It seems as if every single liberal talking head, from David Gregory to David Shuster is suffering from a form of amnesia which has apparently led them to believe that Barack Obama is the very first President to ever be compared to Hitler by protesters … I believe this is the first time I’ve seen a conservative on TV remind a liberal talking head wailing about the Right’s incivility to President Obama that the Left was even less civil without the media getting the vapors for eight long years when President Bush was in White House. Shuster changed the topic rather quickly, didn’t he?

Quite frankly, it’s about time.

Official Republicandom (especially the RNC) needs to understand that this is how it needs to be until the Democrats abandon their bloody shirt Reichstag-redux tactics.

Simply put, Michael Steele needs to either get on the Sunday morning talk shows and/or call up a Press Conference and put an end to the mincing of words by saying what everyone knows; first of all, the reported yelling and screaming of racial and homophobic epithets at John Lewis and Barney Frank very obviously didn’t happen, and the bulk of these so-called attacks on Democrat offices and threatening calls are being coordinated from Washington DC – and most likely the people responsible have their day-jobs at the DNC.

For all of Shuster and his fellow liberal “reporters” transparent pretense that there is no logic that would explain Democrats staging attacks against their own offices, it’s very obvious that the principal beneficiaries of these attacks would be Democrats. They get their friends in the media to flood the zone with stories of being put in physical danger by Republican opposition (which is supposedly inciting the so-called “violence”) to the Healthcare bill they just passed – Republicans would then be forced to shut up and a politically disadvantageous subject falls off the headlines.

Cui bono? It used to be something journalists asked when covering a story.

In addition to their uncanny ability to hear racist shouting apparently too high-pitched for recording equipment to capture, it would appear that, like all other super-heroes, Democrats also have super-genius super-villains who live to torment them, most particularly in times of political difficulty or when embroiled in some scandal. These brilliant folks are capable of making untraceable threatening phone calls (the FBI can easily have the local phone company identify a calling party), leaving threatening notes that apparently collapse into forensic confounding dust after being read and hurling bricks at plate glass windows without being detected by any security cameras.

Like the Democrats’ constant cries of racism whenever they encounter dissenting opinion, the claim to have received threats of violence and “Death Threats”, to be quickly and unskeptically repeated by friendly operatives in the nation’s media outlets is fast becoming a standard part of the Democrat M.O. to change the subject and get out of trouble. Republicans and Conservative activists are then brought in to face stern demands (sometimes not even thinly veiled as questions) by liberal talking heads to accept responsibility for their rhetoric “inciting” their followers to violence.

It’s very fortuitous that most of the Beltway Press Corps happens to be of the conviction that the typical Republican, someone they’ve never met, is a hair’s breadth away from raping, lynching, murdering and pillaging, isn’t it?

Let’s be honest. 9 or more times out of 10, like the “incident” when a swastika was painted by supposed Right-Wingers on David Scott’s (D-GA) office sign last year, or when Rahm Emanuel started to claim that he had received “Death Threats” when it became clear that he was far more involved in Blago’s selling of Barack Obama’s Senate seat than he’d let on, or the attack on the Colorado Democratic Headquarters in Denver in August, these attacks on Democrat offices and “Death Threat” calls happen at all-too-convenient times and practically no one ever gets caught – the rare exception that did get caught in Denver last year turned out to be a Democrat hiree and activist engaged in what was obviously a false flag operation with evidence pointing to at least one local Democrat party official having some foreknowledge of the “attack.”

If Democrats really want the so-called “Death Threats” and “attacks” on their offices to end, they should simply pick up the phone and call Tim Kaine.