To The Christie Campaign: Remember Norm Coleman And Defend Your Victory

Election Night 2004 saw Republican Dino Rossi emerge victorious in the Washington State gubernatorial election against Democrat Christine Gregoire. Yet when the time came to take the oath of office, Christine Gregoire stood at the podium with her right hand up.

Four years later, Election Night 2008 and it was Republican Norm Coleman with the highest number of votes against Al Franken in the race for the Senate. Yet today, Norm Coleman is a private citizen and Al Franken is a United States Senator representing the state of Minnesota in Washington DC.

I’m going to avoid rehashing the blatant fraud and larceny perpetrated by the Democratic machine in King County in the 2004 race and focus instead on the more recent case of Norm Coleman.

There is not much of a need to recap in full the very worst case of out and out election theft in decades, perpetrated by the Minnesota Secretary of State in open collusion with the Franken campaign, the liberal Democrats and Fifth Column Republicans (hereafter known as “Scuzzies” – in (dis)honor of fake Republican DeDe Scozzafava) more concerned with appearing “bipartisan” to the media than protecting the votes of the people of Minnesota on the so-called “bipartisan” canvassing board that conducted the “recount.”

Suffice it to say; can there be any doubt that the fix was in when the ballot below qualified as a vote for Al Franken;

… but this (below) “strangely” did not qualify as a vote for Norm Coleman? 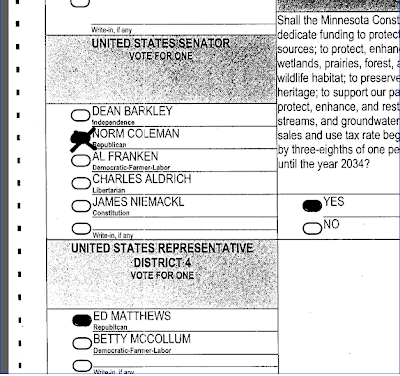 PS: The above episode was brought to you courtesy of the Soros funded SOS (Secretaries of State) Project; the aim of which to get individuals who have sworn to actively slant the process, lie, cheat and steal to ensure that Democrats win elections whether or not they actually get the higher number of votes (like Minnesota SOS Mark Ritchie, a direct beneficiary) elected to state Secretary of State positions (in charge of conducting elections) around the country.

Handsomely paid off in Minnesota, didn’t it?

John Lott sounded the alarm as the theft was happening in a definitive piece for FOXNews. So did the guys at Powerline and quite a few other people in the Right-blogosphere – including myself. Even without the hundreds of fake voters registered by ACORN and any number absentee ballots that made it through their offices, Coleman’s failure to garner more than a 2% of the vote over Franken probably doomed him to lose his lead with Mark Ritchie in the Secretary of State’s office.

Not only were ballots clearly marked for Coleman rejected while similarly marked ballots were awarded to Franken, when the manual recounts in various precincts came up with a lower number for Franken, the machine counts were adopted by the Mark Ritchie-led canvassing board – if the manual count favored Franken, Mark Ritchie and his cronies discarded the machine count. Votes for Franken in a certain precinct were counted twice, giving the precinct more votes than voters on election day. And finally, the canvassing board voted to count ballots “discovered” by Democratic election judge in his car trunk and add the Franken favoring result to the totals.

By the time the lawyers took over, the fat lady had sung her heart out. Franken had won.

But, despite it all, I’m not mad at Franken and his Campaign’s allies (apparently in both parties) in the canvassing board and the Secretary of State’s office. The determination to win and win at any cost is not an entirely unattractive trait – would that more Republicans would be so steel-spined in DC and the state capitals. As the story of the scorpion and the frog reminds us, you can’t expect a scrorpion to act like anything other than a scorpion and you can’t be mad that he stung you – that’s just what scorpions do. Voter fraud is as much a standard Democratic political tool as levelling allegations of racism, “hate” and claiming to be the victim of “death threats”.

Who I am really mad at is Norm Coleman, the NRSC, the RNC and the MNGOP. Even as John Lott, Scott Johnson and John Hinderaker, etc. were pointing out that they were being robbed in broad daylight, they did absolutely nothing. Much like the so-called Republican members of the canvassing board, they, especially Coleman who had run as a “moderate” were too concerned with appearing “bipartisan” to lift up a finger to protect the victory until it was too late.

The entire GOP nationwide should have hailed down a storm of fire and brimstone on Mark Ritchie and his fellow thieves. They should have run ads all over Minnesota, mounted protests, etc. As I wrote back then; “… the fact that the MNGOP is not running ads, calling daily Press Conferences, and inundating the air waves with loud denunciations of this incredibly blatant abuse of the public trust is incomprehensible.”

Which brings us to today. The race is neck and neck between Republican Chris Christie and the incumbent Jon Corzine in New Jersey. Whether or not this is because of “Independent” Chris Daggett, the man being sponsored by the Democratic Party and the deep pockets of Jon Corzine to split the anti-incumbent vote and thereby ensure Corzine gets to continue his misadministration in Trenton for the next four years, is not the issue.

The SIEU (i.e. ACORN) and the Democrats, as expected, have filed suit to ensure that at least 3000 of their manufactured voters be allowed to cast absentee ballots. These voters are known to be fake because their signatures are wildly different from that on file. As John Fund informs;

Democratic Party lawyer Paul Josephson wrote New Jersey’s secretary of state asking her “to instruct County Clerks not to deny applications on the basis of signature comparison alone.” Mr. Josephson maintained that county clerks “may be overworked and are likely not trained in handwriting analysis” and insisted that voters with suspect applications should be allowed to cast provisional ballots. Those ballots, of course, would then provide a pool of votes that would be subject to litigation in any recount, with the occupant of New Jersey’s highest office determined by Florida 2000-style scrutiny of ballot applications.

What the Democrats are hoping for is a replay of Minnesota – where a bunch of Scuzzies to provide “bipartisan” cover, a partisan Secretary of State and liberal Democrats would blatantly steal the election for their candidate while the Republican is too terrified of offending liberal journalists to do a thing about it.

The question is whether or not Chris Christie is prepared (unlike Norm Coleman) to defend his victory in the post-Election battles that have become far too common in American politics since Al Gore called Bush to withdraw his concession in 2000. The instant the polls close tonight, the Christie Campaign should be on war footing, with advertising dollars ready to blanket the airwaves and loudly trumpet every act of theft and fraud by whatever body is put in charge of overseeing any recount, no matter how many times it is emphasized that the body “Bipartisan” and therefore holy and above reproach.

Christie should not make the mistake of aping Norm Coleman’s strategy of grinning and bearing it in a bid to appear “moderate” and “above the fray”. There will be shrieks from liberal columnists on print and broadcast warning Christie not to fight it and even to concede even if he is in the lead. The Democrats will certainly accuse him of voter suppression, “hate” and “death threats”. But this is standard operating procedure – he would be accused of it no matter how politely and quietly his campaign objects to votes found next week in Jon Corzine’s home in New York being added to the tally. Or even if he says nothing at all.

Fire and brimstone, Mr. Christie. Unleash the dogs of hell.