On the use of Newspaper Headlines as Political Weapons

The Washington Post’s front pager about Sarah Palin’s per diem expenditure for her upkeep as Governor of Alaska demonstrates one of the Left-Wing news media’s (especially print media) most disingenuous and corrupt practices – the use of newspaper headlines (and often, ledes) as a sort of push-poll mechanism against political foes.

If any set of people should know the power of words to convey deeper meanings than the mere literal, it is headline writers and the editors that sign off on them. More than anyone else, these people know that the bulk of the public does not do more than glance at the headlines on the front page and if time permits, read the lede paragraph of what they find interesting and shuffle on to the counter, leaving the newspaper still on the rack.

I believe it is with this knowledge that everyone involved with the production of this rather unremarkable article (except for the fact that Palin’s expenditures are 20% that of her predecessor’s) about a public official’s entirely reasonable, legal, above-board and quite frankly frugal public expenditures somehow managed to get it on the Washington Post’s front page under this particular headline:
“Palin Billed State for Nights Spent at Home“

Simple. Because the former allows the WaPo to strongly imply a breach of ethics on the part of Sarah Palin – the only reason such an article detailing absolutely no such breach or questionable act would earn a spot on the front page. The headline and its placement has no other purpose than to capitalize on the ignorance of the average American voter seeing the headline at the supermarket in favor of the Obama/Biden ticket.

Of course, every single editor and newsroom writer at the WaPo would argue that the headline is entirely accurate and point to the content of the article itself (fair enough in itself) as proof that they had no intention of suggesting that Sarah Palin was collecting money she should not have. They would, of course, claim that they can see no way in which any casual headline browser would see the headline and not automatically assume Sarah Palin was bilking Alaskan taxpayers of the nightly cost of a suite at the Ritz while she was sleeping at her own home.

They would also be lying.

It’s an old, dirty and malicious trick, they know it and when it comes to politicians they like (or worship) they’re very careful to craft headlines and ledes that don’t lead the casual headline skimmer to take away something negative about their subject.

Imagine a newspaper printing a story about a politician with a headline saying “Congressman Slept With Seventeen Year Old High School Student” and right there above the fold, on the front page, is a picture of the 41 year old Congressman side by side with the year book picture of a pretty high school sophomore smiling innocently at the camera. Imagine, upon reading the article, you discover that the year book photo was from 23 years ago … meaning that the congressman slept with the 17 year old school girl when he was 18.

Would you believe any editor or writer at that newspaper who tries to convince you that there was no malice involved in choosing that particular headline and placing it on the front page – on account of the fact that the headline is literally true?

Same deal here. The only difference is in degree. 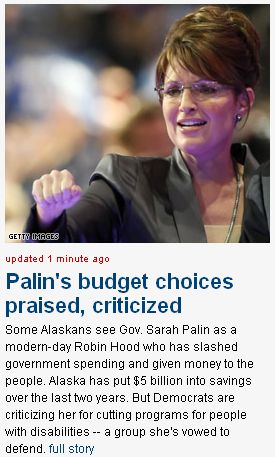 PS: Check out another corrupt media practice of long pedigree [H/T: slublog over Ace’s]: repeating already known falsehoods but justifying it by attributing it to a third party. Here, CNN is repeating the long-debunked claim that Palin cut spending for programs for the disabled by attributing to Democrats – with nary a word (in the caption or the story itself) pointing out that it’s completely untrue.

Leftists Are About to Kill Millions of People Right Before Our Eyes
Townhall
PolitiFact: No, Stacey Abrams didn't support pulling the MLB All-Star game out of Atlanta
Twitchy
Barack Obama With the Worst Take of All Time on Uvalde
Redstate
Mass Shooting Facts to Shut Down Your Liberal Sister and Her Annoying, Man-Bunned, Non-Binary 'Boy' Friend at Your Memorial Day BBQ
PJ Media