The state of the Democrat Party, or how much weirder can it get? 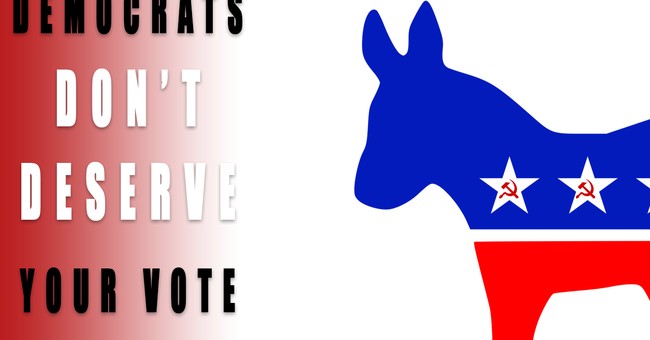 How many crises can the Democrat Party endure, along the route of trying to derail Donald Trump? How many false alarms can they endure, because there has been absolutely nothing that has been able to stick? Starting back at the silly free advertising the mainstream media faithfully, but arrogantly donated to his campaign, and continuing forward to this day, would fill a book, and I can’t type that much, but if you go back and peruse all the articles about how the Democrats have tried everything, including a few Lodge cast iron skillets, it is enough to make you come to only one conclusion: that the Democrat Party has finally been exposed enough to the American voter that they are well and truly a cooked goose, waiting to be thrown in the trash.

They are dead. They have had no ideas about governance, nor have they any national candidates to attract their own base. Speaking of their own base, I haven’t seen any numbers, but I will bet that their base is a lot smaller than they even realize. Candace Owens, Brandon Straka and many others who were raised to be good young Democrats have done a lot of damage to the Democrat voter base. Some writers around Red State are concerned about how to get black voters to come to the Republican Party, but I think the black voters are already self migrating, just maybe not in the numbers some wish, but enough to erode the Democrats’ chance of ever being in the majority, again, for the presidency. And don’t let this current manufactured down tick in the market worry you. It’s just more fearsplaining, and people are going to get real tired of it, real soon.

One author explained the situation the Democrats are in as being intergenerational, which is, I think, a good way to put it. After decades of schooling those young ‘ens,  through that vast network, known as the public education system, one might think the left has a ready supply of voters to take the place of the aging leftist population, but hold on. They forgot to teach those chillins, between all the woke chanting, SJW chanting, and God knows what else they have been teaching them, those critters might just be proving the old saying about “Once you start getting paychecks…” as having some validity, because an awful lot of them are not even bothering to vote, or they had some other crisis conversion back to reality.

I find myself repeating the same thing when every article tries to discover what is going on in the Democrat Party. It’s simple, folks. They are desperate. This isn’t rocket science. The party of hope and change has run out of things to bark about. They have run out of things to be outraged over, but mostly, they made the biggest blunder in political history: They laughingly contributed to the campaign of Donald Trump, and he was no fool. He saw a deal, and it was free. The left is so outraged for their own arrogance letting an opponent run them down like they got, in 2016, that they are going to be so outraged that they can’t think straight. If you think about that, that would be terrible for anyone being on the receiving end of that. And all it did was start the largest coup attempt, all because of their dear beloved vanity.

I don’t really blame them for being stupid. I’ve always known they were that. You can insert any number of cliches to laugh at the Democrats, but just make sure you vote in November, to continue those laughs all the way to the 2024 election, because this isn’t about to change, any time soon.

It is nothing but desperation. The Democrats have no ideas, no presidential candidates, nothing but a bunch of sick, twisted desperate people, saying and doing the most absurd stuff you could ever imagine.

Heck, don’t you feel just the least little embarrassed when you do something stupid? I do! But they are so in denial of the cause of their woes, that they don’t feel the least embarrassed for their own stupid acts.

And with Trump leading them around like a dog on a leash, it makes it even more funny.

LIVE: VIP Gold Chat: Everyone Is Chasing RedState, Stanley Cup Playoff Hockey, and Whitmer Is Late To The Party Again