We Have Met the Enemy- Aww, Isn’t He Cute!

Global Warming fanatics unite! It is not the Sun, natural causes or flawed models that are responsible for Global Warming. It is an enemy that walks among us. They tread cautiously- sometimes almost silently, provide a source of warmth and often sustain us. In some countries they play a major economic role, making any attacks on them very vexing and dangerous. They have been called cute, woolly and docile. But don’t let that designation fool you. They are dangerous, malevolent usurpers of our planet and livelihood. Why, the very fact they eat and breath are contentious points of discussion. The most horrible and despicable part of it all is they, wait for it, belch! Oh, the horror. 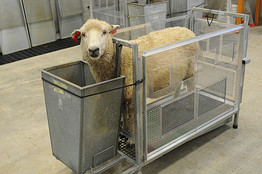 “PALMERSTON NORTH, New Zealand — On a typical day, researchers in this college town coax hungry sheep into metal carts. They wheel the fluffy beasts into sealed chambers and feed them grass, then wait for them to burp.

The exercise is part of a global effort to keep sheep, deer, cows and other livestock from belching methane when they eat and regurgitate grass. Methane is among the most potent greenhouse gases, and researchers now believe livestock industries are a major contributor to climate change, responsible for more greenhouse-gas emissions than cars are, according to the United Nations.”

So how do we deal with this terrible, awful threat to humanity? Do we take away Al Gore’s jet, force him to turn down the thermostat or stop erupting noxious statements? No. Heavens, no.

“Plenty of people, including farmers, think the problem of sheep burps is so much hot air. But governments are coming under pressure to put a cork in it, and many farmers fear that new livestock regulations could follow. They worry that environmentalists will someday persuade the U.S. Environmental Protection Agency to seek to tax bovine belches. Some activists are urging consumers to stop buying meat and thus slow climate change.”

What is the answer? More taxes and “change”. Time to hide the dog- he’s next.

It Sure Looks Like CBS News Edited Body Cam Footage to Omit a Key Frame in Adam Toledo Shooting
Townhall
'Journalism...ish': The Oregonian deletes 'poorly worded' tweet on the police-involved shooting of a 'white male in his 30s' in Portland park
Twitchy
The Biden Administration Seeks Revenge on the Man Who Exposed the Trump-Russia Hoax
Redstate
Joe Biden a No-Show to Greet Japanese PM—and the Preview of a President Harris Is Awful
PJ Media