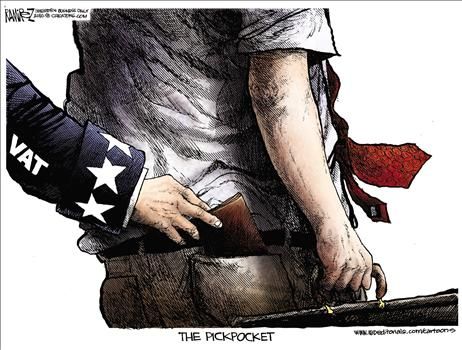 I love this cartoon because it really illustrates the ideas behind the big, Democratic soaking of the whole country.  But, I have thought about a cartoon that would also really illustrate this.  Unfortunately, I can’t draw a stick figure, but I love it conceptually.

The cartoon would be a four panels. First panel is Pelosi holding a gun to the tooth fairy’s head as he hands over dollars.  Second panel is Harry Reid standing in a grave with a wallet in his outstretched fingers.  Third panel is a smashed piggy bank with a couple of pennies left sitting next to a music box.  Fourth panel would just have Obama in front of his beloved teleprompter with the speech bubble, ‘I will not raise taxes a dime on those making less than $250, 000, $200,000, $175,000,  er, never mind.

Why Is the NIH Still Trusting Peter Daszak?
Scott Hounsell