This is so expected.  First, the “gay pride” flag was flown over the U.S. Embassy in Madrid.  Then it was Israel’s turn to hoist the rainbow ensign over the embassy in Tel Aviv.  Now, Secretary of State [mc_name name=’Sen. John Kerry (D-MA)’ chamber=’senate’ mcid=’K000148′ ] will appoint an LGBT special envoy.

“It will be an openly gay foreign service officer. We don’t have a finalized name yet. But we will announce soon,” Harf said.

Résumé qualifications for this position:  be openly gay.  It’s not like there’s any discrimination going on here.  There’s no irony at all that the State Department will require a particular gender preference combination for a job, but if a job posting ever said “heteronormative pale penis people only”, a hurricane of Title VII lawsuits would proceed from the liberal camp.  Maybe Jesse Ventura or Chuck Norris should apply for the position, and when denied on the basis of “not being gay”, hit State with a discrimination lawsuit.

When The Times of Israel asked Ms. Harf* what, specifically, an LGBT envoy would do, in relation to, say, the same-sex marriage referendum on the ballot for Valentine’s Day in Slovakia, she delivered this non-sequitur: “The US doesn’t take a position on the issue of same-sex marriage in other countries.”  I’d laugh if my palm wasn’t over my face.

Message to the world from the Obama administration:  burn, kill, and behead your enemies all you like; oppress the weak, take their land and displace them; steal and pillage with impunity.  But don’t mess with gay rights or climate change, because those are our President’s strategic imperatives.

This woman is Julia from that ad that they ran in the 2012 campaign. I mean, this woman has been, from the moment of birth, she has been saturated in modern-day progressivism, leftism.  It just reeks, it’s so obvious.  And part and parcel of that means that she had no idea what she’s doing, but thinks that she’s the smartest person in the room. 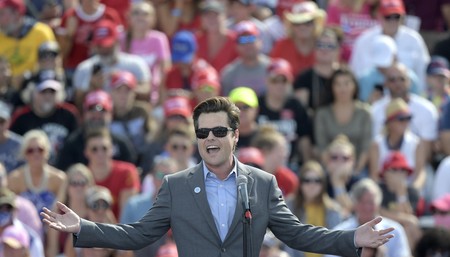