The OFA Peril: Ignore at our own risk

You’ve just won an all expense-paid trip to Hawaii.

NOW do I have your attention?

I’m sure all of you have heard the words “this is serious” and these three little words have become banal to you all.

Many of us Conservatives seem to be “riding high” on the presumption that the November elections will be a slam-dunk for us all. However: money, great candidates and astute campaign managers cannot be assumed to be a winning combination and is no guarantee against the corrupt Godfather-tactics of the “Community Organizer-in-Chief” in the Oval Office and his elite OFA (Organizing for America) forces. And money is no obstacle.

Several months ago in conjunction with Anita Moncrief I warned against the ongoing threat of OFA.

Just to make sure everyone realizes the fact below, SO LET ME BE PERFECTLY CLEAR:

I’ve tried to get the attention of my own reps in Congress, the GOP, politicians on twitter, Michael Steele. You name it. My pleas have either gone ignored or I have received the response of:

We know they are there.

Sort of like the scorpion or rattlesnake waiting outside your hotel or bedroom window. NOT a comforting thought.

So this is how it is going to be. We are on our own. We are going to have no choice but to counter-act them ourselves. I went undercover for the third time last week with a conference call to Ohio Lt. Governor Lee Fisher (Dem) who won the Ohio US Senate primary against Secretary of State Jennifer Brunner. I again pretended to be one of “them.” Ohio is a true battleground state and is usually a deciding state not only in presidential elections but mid-term elections as well.

You are all saying “well, Brunner lost the primary to Lee Fisher. But she ain’t a threat anymore.” WRONG! Soros-funded and ACORN- backed Brunner is still in charge of the November election and I don’t believe anything will be different this go-around. Even though she lost the primary corrupt Brunner will still be on Obama’s side and stop at nothing as she did in 2008 to pull out all the stops to put and keep Dems in office. Could be she was promised something by Zero for a “great performance”?.. Lest you forget how Election 2008 went in Ohio here is a recap. And back in February Hotline On Call announced the ODP (Ohio Democratic Party) will build a “firewall” to insure Obama is again re-elected in 2012:

The ODP has been deploying staffers all across the state for a road show known as the “Knockout” program. The program aims to “knockout the Republicans for the next decade [by] motivating activists to get involved early and often.[sic] The ODP plans to hold these “Knockout” events in all 88 counties, and in doing so, they’re lengthening their volunteer list. What’s more, ODP field staffers say they’re supplying those volunteers with access to some of their best data to make them most effective now.

Fisher announced on the call last week that Obama will be bringing his artillery to Ohio, rolling out his dreaded OFA “rapid response” teams and included will be at least one, but probably more, “appearances” by the Organizer-in-Chief himself.

If you read my “An Inside Look at the OFA” post you’ll see a couple screen shots of these “rapid response” teams I managed to get while on a webinar with them and warned everyone about. I’ll show them to you again: 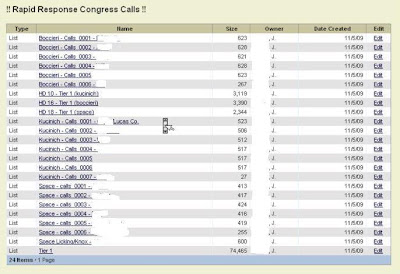 As you can see calls are broken down by representative, precinct, and every single one is carefully logged.

When I heard about how our beloved Scott Brown caved on the cloture vote on Wall Street Reform, apparently under OFA pressure I was poo-pooed by many who believe the 922 calls claim to have been made to his office by OFA was exaggerated, but after what I’ve seen I absolutely believe this is true. And it’s confirmed by this one OFA tweep:

Below is another screen shot of how Lincoln was tossed during the Healthcare Deform fiasco: 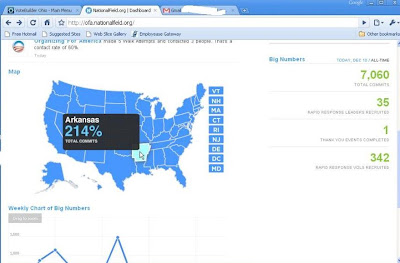 As you can see here OFA actually made 114% more contacts than they had originally hoped for. A total of 7,060 calls, doors-knocked on and other means of contact.

As Ohio goes, so goes the nation.

For the most part, yes. Ignore Ohio at your own peril, and the peril of the nation!

And this is what’s in store for all of us all over the country. How Obama plans to keep control in Election 2010. It ain’t pretty:

I can’t make it any plainer than that. Sorry. We’re all gonna have to go out there and work our buns off just like they are or we’ll be headlining in the premier episode of next season’s “LOST.” The biggest problem Conservatives have is we haven’t learned to play hardball like the other side does, so in the words of Todd Beamer

FYI please read Anita Moncrief’s conclusion “An Inside Look at the OFA Part II” where she connects all the dots between the “usual suspects” of OFA, Obama, SEIU and ACORN.

Wednesday Ms. Moncrief will be following up with the second part of the OFA/DNC expose and their illicit coordination with ACORN to ensure their candidates are elected. Stay tuned…

Crossposted for me by Anita Moncrief at HotAir

Swalwell Tells Jake Tapper He Did Nothing Wrong in Relationship With Fang Fang, Says It's Retaliation
Jennifer Van Laar

Rob Portman to not Seek Re-Election in 2022 -- Does This Create and Opportunity for Jim Jordan in the Senate?
Shipwreckedcrew

IN MY ORBIT: The Stupid People of California Will Recall Gavin Newsom

Everything Is Extremism
Scott Hounsell