Democrat Legislators Go On Strike in Wisconsin, Phone in Demands to CNN

It’s getting harder to write a post without pausing to chuckle at the absurdity of the Democrat-led protests in Madison. The first day of protests was sort of a shrug. The second day produced some interest. Thursday, though, was like watching an alligator trying to eat an electric eel—funny, but in a freakish sort of way.

Walk Like an Egyptian. At some point during the day on Thursday, even before it was discovered that the Democrats’ Organizing for America has been helping to mobilize the Madison mobs, Rep. Paul Ryan compared downtown Madison to Cairo.  Meanwhile, socialists (yes, socialists) were urging an Egyptian-style uprising while high school students were taken by teachers to the protests (presumably with parental permission), yet had no idea why they were there.

Then, the Democrats who were supposed to be voting on Scott Walker’s budget decided to go on strike in solidarity with the union protesters by shirking their legislative responsibilities, sneaking out the back door and fleeing to Illinois—to stay at a non-union Best Western Resort—only to be caught on camera as they were routed by Tea Party activists and forced to flee once again.

Somewhere during all this mayhem, the funniest event of the day transpired, when one of the fugitive lawmakers called into CNN with a list of demands.Via The Daily Caller:

State Senator Mark Miller, a member of the missing band of Wisconsin Democratic lawmakers who fled Madison Thursday to avoid a vote on a budget bill, called into CNN with the group’s list of demands for Republican Gov. Scott Walker.

Miller, a state senator since 2004, would not disclose where he and his colleagues were hiding out, saying only “we are in what we consider a secure location outside the capital. We are not all in one place at this time.”

Miller’s demands focused on the collective bargaining portions of the bill.

“We demand that the provisions that completely eliminate the ability of workers… to negotiate on a fair basis with their employers be removed from the budget repair bill and any other future budget,” Miller said.

He also demanded legislative oversight on changes to the state’s medical programs, which are targeted for changes in the bill. The bill would also require union members to contribute to their health care and pensions.

Miller and 13 other Democrats went missing Thursday morning when a vote on a budget-repair measure was imminent in the Republican-controlled Senate. It would have passed the Senate after getting out of committee on a party-line vote late last night, so Democrats left the building to stall a vote on the measure.

And, to top off the day, even the queen of forcing votes, Nancy Pelosi, chimed in on twitter saying “I stand with the students & workers of #WI, impressive show of democracy in action #solidarityWI.” [Her aides apparently have taught her how to use #hashtags.]

It’s been argued that America is quickly becoming like a third-world country. On Thursday, Wisconsin unions (with the mobilization support of the Democrats’ OFA) demonstrated the same tactics as the State Department-inspired uprisings in the middle east: Organize a mob, ensure that no business is done, make demands known on CNN, and keep pushing and pushing until, as Saul Alinksy instructed, the the desired outcome is accepted.

As comedic the Democrats have become, the fight in Madison is a game of high stakes. Unions have chosen the path to lead the charge toward financial ruin, and they are willing to (as they have in Tunisia and Egypt) remove any semblance of civility in their path. The Left knows that if they can break the will of Scott Walker and the GOP in Wisconsin, they will succeed in the other states. And, as Alinsky taught them, they will begin trying different tactics to break down the resolve in Madison’s statehouse. 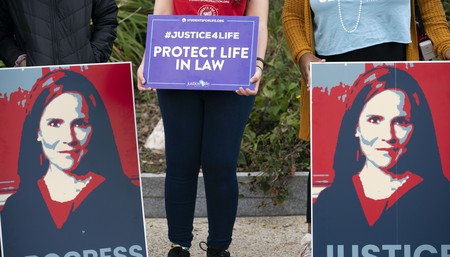 Here's What's At Stake If Smith and Wesson Loses Its Case Against New Jersey
Townhall
'Our freedoms do NOT belong to you': Hillary Clinton just absolutely REKT for sending completely tone-deaf tweet on vaccinations and LOL
Twitchy
Supreme Court Accepts a Mississippi Abortion Case That Seems Likely to Overturn Planned Parenthood vs. Casey
Redstate
The COVID-19 Test No One Is Talking About: Make Sure Your Children Have It Before They Are Vaccinated
PJ Media