Obama Tries Snookering America By DISCLOSE-ing Disdain For The Truth

How far has the Office of the President been denigrated when, thirty-something years ago it took two crack reporters from the Washington Post and some guy named “Deep Throat” to uncover the lies enveloping the White House, to today, when a pint-sized faux-Jersey girl named Snooki can catch the President of the United States in a lie? 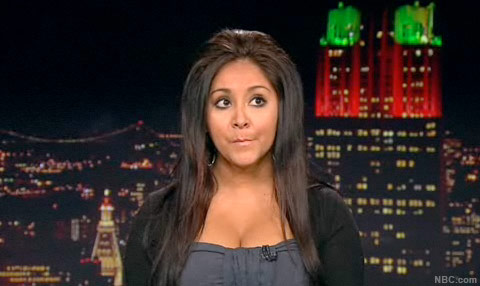 Really. How pathetic is it when, barely 20 seconds into this week’s presidential address, the temptation to laugh gives way to knee-slapping guffaws at the transparent and hypocritical effort to demonize faux villains for something he, as well as his union boss cronies, have been doing for years?  Here’s his statement:

“As the political season heats up, Americans are already being inundated with the usual phone calls, mailings, and TV ads from campaigns all across the country,” Obama said. “But this summer, they’re also seeing a flood of attack ads run by shadowy groups with harmless-sounding names. We don’t know who’s behind these ads and we don’t know who’s paying for them.”

Let’s start with the first point (Americans being inundated with calls mailings and TV ads), shall we?…

Now, President Obama is under serious attack from Newt Gingrich, Sarah Palin and much of the Republican Party, who are using the proposed Islamic community center in Lower Manhattan to whip up fear and hate.

But, then, what about the President’s second point…all those “shadowy groups with harmless sounding names?”

Forgetting that the President is on his sixth vacation (six more than this writer has had in…well…years), that the debate over whether he lies has become so easily proven, it is almost hysterical how blatantly obvious the President tries to snooker (sorry, Snooki!) America into believing that he and his leftist cronies in the union movement (and elsewhere) are not doing exactly what he is accusing other ‘unnamed’ groups of doing.

Of course his entire message was more about making an argument for limiting the First Amendment Rights of some, while favoring his union bosses through the “harmless-sounding” DISCLOSE Act.

Unless, of course, the President may have already spent too much time in the fecal-infested waters around Martha’s Vinyard because, if we didn’t know any better, we could swear he’s full of **it.

After all, as the President stated: “The only people who don’t want to disclose the truth are people with something to hide.”

We couldn’t agree more, Mr. President, and you’ve made our case for us.