The national mood continues to sour, dampened by yet another abysmal unemployment report.

The unemployment rate was unchanged at 9.5 percent in July for a second straight month, just below market expectations for a rise to 9.6 percent. The steady jobless rate largely reflected a drop in the labor force as discouraged workers gave up the search for jobs. A record number of Americans are putting their hands out for the drivel doled out by the same government that, through spending beyond its means, created and perpetuates the conditions that have led to their misery.

The number of Americans receiving federal aid through the Supplemental Nutrition Assistance Program, commonly known as food stamps, soared to a record 40.8 million in May, according to government data released shortly before the Senate voted to cut billions from the food stamps budget.

While they make a faux and  futile attempt to deny the contempt the Administration has for the job creators of the nation.

Businesses are said to be sitting on $2 trillion in income but are not hiring, partly because of the administration’s policies, according to Republicans.

Obama on Wednesday will meet with small-business owners at the Tastee Sub Shop in Edison, N.J., where he will stress his support for a package of small-business tax cuts the Senate is considering.

The President meets with his courtiers and promises them more plunder in exchange for their continued support.

Like a lover gone astray returning to declare his love, President Barack Obama appeared yesterday at the executive committee of the AFL CIO, the country’s largest federation of labor unions.

But Obama’s rock star presence seemed to change the labor’s dire mood completely. Randi Weingarten, president of the American Federation of Teachers, has characterized Obama’s endorsement of the mass firing of union teachers at Central Falls, R.I., as a desperate attempt to  “score political points by scapegoating teachers,” But she gave the president a kiss on the cheek and gleefully took photos of him with her iPhone.

When Obama offered his apologies, the elation of the room of labor leaders simply burst. He touched on the two issues at the heart of labor leaders – unionbusting and trade reform – in a way he never had before. Obama said: “We are going to rebuild this economy stronger than before, and at the heart of it are going to be three powerful words: Made in America.” Obama continued “We’re finally enforcing our trade laws—in some cases for the very first time” in reference to his decision to place tariffs on illegal Chinese tire dumping and the first ever US filed labor rights complaint against Guatemala.

After they joke about the cake, the President’s political trick of epic proportions is revealed as he jets off to dine with his millionaire friends and corrupt candidates. 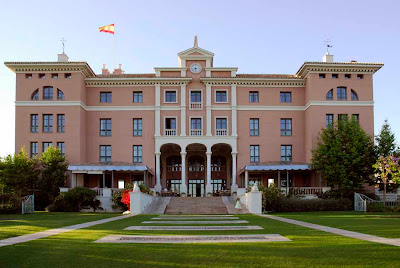 Sacrifice is something that many Americans are becoming all too familiar with during this economic downturn. It was a key theme in President Obama‘s inaugural address to the nation, and he’s referenced it numerous times when lecturing the country on how to get back on its feet.

But while most of the country is pinching pennies and downsizing  summer sojourns – or forgoing them altogether – the Obamas don’t seem to be heeding their own advice. While many of us are struggling, the First Lady is spending the next few days in a five-star hotel on the chic Costa del Sol in southern Spain with 40 of her “closest friends.” According to CNN, the group is expected to occupy 60 to 70 rooms, more than a third of the lodgings at the 160-room resort. Not exactly what one would call cutting back in troubled times.

Reports are calling the lodgings of  Obama’s Spanish fiesta, the Hotel Villa Padierna in Marbella, “luxurious,” “posh” and “a millionaires’ playground.” Estimated room rate per night? Up to a staggering $2,500. Method of transportation? Air Force Two.

To be clear, what the Obamas do with their money is one thing; what they do with ours is another. Transporting and housing the estimated 70 Secret Service agents who will flank the material girl will cost the taxpayers a pretty penny.

While a trip to the Grand Tetons might put bread on the tables of America’s peasants, America’s royals, in the words of their famous predecessors, have spoken: Let them eat cake.