Please check out the LUR PSA at the bottom of this post. 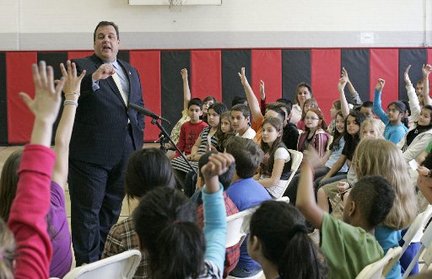 Just to put this into perspective a little…

Unions have forever controlled New Jersey politics. With their octopus-like tentacles reaching into nearly every crevice and orifice of the Garden State, New Jersey taxpayers have long paid the price.

In New Jersey, a new governor inherited a fiscal disaster from his predecessors, the most recent a blatant lover of unions (who happened to have schtupped the president of the largest state workers’ local union–the CWA).

Now, when the aforementioned new governor comes in and begins to undo the schtupping that the taxpayers received from the previous governor and his schtuppee, the CWA bosses want to schtup their members by raising union dues to attack the new governor.

An attempt by New Jersey’s largest state workers union to raise cash for media campaigns to hit back at Gov. Chris Christie has fallen flat.

Despite the support of most leaders of the Communications Workers of America, its members soundly rejected a plan to up their dues to fund ads to counter Chris Christie, a relentless critic of public sector unions.

After three weeks of voting, the proposal went down 3,525 to 2,201. Chris Shelton, vice president of CWA District 1, called the outcome unfortunate and noted how few members voted.

The CWA represents 40,000 state workers. Six of seven presidents of locals that represent state workers supported the plan, which would have raised members’ dues an additional one-tenth of one percent (to 1.25 percent of their salaries) to fund a program similar to one run by the powerful New Jersey Education Association.

It would have collected about $2 million a year for ads emphasizing the role of state workers and pushing back against Christie, who wants to enact legislation allowing towns to opt out of civil service rules and has said he wants to change the pension system for current workers.

The union began running radio and TV ads about Christie’s proposed civil service changes in May, paid for by the national union and some locals. Shelton wrote that the union would ask locals to continue to contribute to pay for more ads.

Christie spokesman Michael Drewniak yesterday highlighted the apparent divide between the union members and their leadership.

“It suggests that the union leadership — just as we’ve seen with the leaders of the New Jersey Education Association — may well be out of touch with their members’ concerns and priorities,” he said. “Aside from that, the idea of raising dues for the sole purpose of funding a public fight with the governor seemed a little desperate.”

Of course, the union bosses would rather deny the fact that the unions have controlled the politicians in New Jersey for decades and now that they’ve run the state into the trash heap, they’re claiming to be victims.

As a LaborUnionReport Public Service Announcement, we understand there is a new website out there for fans of New Jersey’s new governor, Chris Christie, called “I HEART CHRIS CHRISTIE.” Check it out and show Chris Christie some love [in a platonic way, of course]!

Putin Asks Reporter If US 'Assassinated' Ashli Babbitt
Townhall
Just hook it to our veins: @redsteeze has been working on an incredible collection of 'libs freaking out over Jon Stewart believing in science'
Twitchy
More Evidence Emerges That Joe Biden Is Not Well
Redstate
INFIGHTING: Harris vs. Biden Over Who Owns the Border Crisis
PJ Media