With the union-controlled National Labor Relations Board doing labor’s bidding these days, one would think union bosses and their Democrat minions would forget about pushing the job-destroying and hallucinogenically-named Employee Free Choice Act. But apparently that is not the case. 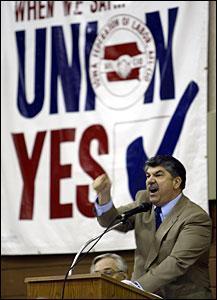 As the United Auto Workers (UAW) meets in Detroit this week to install a new king (Bob King, that is), they had a visit from the AFL-CIO’s top boss, Richard “the Fifth” Trumka, who, among other comments, seemed to be calling up the spirits of EFCA:

Trumka also called on UAW members to intensify phone calls, letter writing and other lobbying of their congressional representatives and senators to pass the Employee Free Choice Act….

“We won’t quit until the EFCA becomes the law of the land and everyone who wants a union can have a union,” Trumka said.

Not to be outdone by Trumka’s remarks, Rep. John Lewis (D-GA) seemed rather frustrated by Democrats current impotence on EFCA: