Unionizing Doctors: SEIU already reaping rewards at having Craig Becker at the NLRB 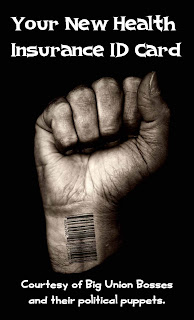 The Service Employees International Union (SEIU) is already reaping the rewards of having its Associate General Counsel Craig Becker sitting on the union-controlled National Labor Relations Board (NLRB).

On June 3rd, the union-controlled NLRB issued a 2-1 decision denying a request for review (a form of appeal) by St. Barnabas Hospital regarding the unionization of its resident physicians.  The two board members were former-Teamster attorney (and current NLRB chairman) Wilma Liebman and SEIU’s former associate general counsel Craig Becker.  The dissenter was the last remaining GOP appointee Peter Schaumber (whose term expires in August).

Legitimate and unanswered questions still remain about why the SEIU’s Becker refuses to recuse himself on cases involving the SEIU, but the fact is, the SEIU’s presence on the labor board is already reaping rewards for the purple behemoth.

Resident physicians at St. Barnabas Hospital voted overwhelmingly to form a union after a two-year fight. The National Labor Relations Board today announced a 119 to 2 vote in favor of the residents and interns of joining the Committee of Interns and Residents/SEIU Healthcare as their exclusive bargaining agent.

“St. Barnabas’s frontline caregivers haven’t had the voice they need to advocate for a better, safer hospital for themselves and the Bronx community,” said Eric Scherzer, Executive Director of CIR, in a statement. “With today’s vote, they’ll be able to work cooperatively with management to achieve their goals.”

But the hospital immediately said it may appeal an NLRB decision that allowed the vote to be counted.

A St. Barnabas spokesman also noted that just 121 of the 280 eligible residents chose to vote, but the union says that total is misleading. A total of 168 votes were cast; St. Barnabas challenged 47 of them because they belonged to residents leaving at the end of the month. CIR agreed to let the remaining 121 votes be counted first, while the the remaining challenged ballots would only be opened if the outcome was in question.

While the hospital is appealing the NLRB’s refusal to review its case, the NLRB’s current position (unless overturned by the courts) enables the SEIU (and other unions) to unionize resident physicians across the nation, adding tens of thousands of members (and millions of dollars) to the SEIU’s rolls and treasury.