The Chicago Way on Trial: Blago, Obama & the SEIU

If you ever catch on fire, try to avoid seeing yourself in the mirror, because I bet that’s what really throws you into a panic. Jack Handey

Summers are generally known as a time for forest fires and where there’s smoke, there’s usually a fire burning.  Right now, as waves of oil splash along the coastlines of the southeastern United States, there are large plumes of smoke coming from Pennsylvania, as far away as Colorado, and a huge cloud of smoke is hanging over the State of Illinois threatening to choke the airways of several Washington insiders.  And, while the White House fecklessly tries to deal with all of them, each (individually or collectively) have the potential of bringing down the presidency of Barack Obama. 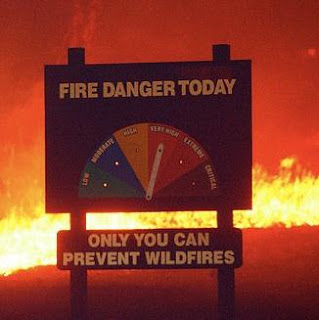 In Washington, the White House is scrambling to contain SpecterGate (the alleged promising of a job to Congressman Joe Sestak in exchange for dropping his campaign to unseat Sen. Arlen Specter).  Then, just as Sestak and the White House appear to have their stories straight, Andrew Romanoff throws more gasoline onto the fire by  disclosing that White House Deputy Chief of Staff Jim Messina allegedly proffered not one, but three possible positions to Romanoff should he too drop his Senate bid.

Although the White House may still retain some “plausible deniability” on SpecterGate and the Denver Deal, since the parties have all seemingly been able to coordinate their stories (well, Sestak and Romanoff weren’t actually offered paying jobs) and there have been no subpoenas issued (yet), the unmistakable odor of burning brush is in the air.

SpecterGate and The Denver Deal may ultimately blow up into raging infernos if the media begins to draw the nexus between the two as a wider pattern of bribery and secret back-room dealings.  However, that would take reporters willing to dig deeper than simply believing a White House explanation broadly issued at 6:25 in the morning via e-mail.  In the end, though, The Denver Deal and SpecterGate may rest on the possible collaboration of the parties, as well as what former President Bill Clinton refers to as “it depends on what ‘is’ is” and what he did or did not do under White House orders.

The one scandal that has the White House positively p*ssing in its pants is the trial of ousted Illinois governor Rod Blagojevich which began last Thursday. 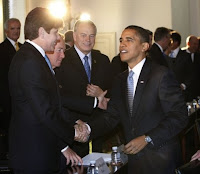 Last December, we mentioned a possible smoking gun as Blagojevich’s defense team requested FBI notes from interviews with the Obamas, Rahm Emanuel, Valerie Jarrett and SEIU bosses Tom Balanoff and Andy Stern.  Now, as the trial gets underway, the White House is bracing for the smoldering embers to drift back its way:

The corruption trial of former Illinois Gov. Rod Blagojevich is already shaping up to be a political circus, promising to lay bare the underbelly of Chicago politics.

But while the stakes are clear for Blagojevich — he could be the fourth Illinois governor in 40 years to retire to a federal prison — some of the most powerful Washington insiders are braced for potential political damage from the trial, which begins Thursday.

Swirling around in the center of this circus ring-of-fire is the Service Employees International Union (SEIU), specifically Chicago SEIU boss Tom Balanoff and former SEIU international president Andy Stern.  In April, SEIU president and king-maker Andy Stern abruptly resigned from the SEIU, which immediately fueled speculation that there was a connection between the Blagojevich scandal and Stern’s resignation.

This speculation was further fueled when redacted portions of the defense’s subpoena request were revealed just days after Stern’s resignation:

Since Stern is now gone and his hand-picked successor Anna Burger was roundly rejected in a purple palace coup, it is unclear whether Burger loyalist Tom Balanoff will be thrown under the purple bus by SEIU’s new president, Mary Kay Henry.  If she truly wants to rid the union of some its most recent controversies, Balanoff may be a noteworthy victim of such a purge.  If this happens, Balanoff may hold the key to what really went down in November 2008 and may be willing to spill his guts.

However, as Blago’s trial is still in the jury selection stage, there is still plenty of time for all of the parties to get their stories straight (even though some are seemingly contradictory), which would leave Blago with a his word against theirs case.

Unless one of the parties (like Balanoff) flips, turns state’s witness, or is caught perjuring him or herself on the stand, it is still possible for the White House to get past the summer with only a little smoke inhalation.

Then again, all it takes is one man to start a forest fire and, right now, there is a lot of smoke billowing out of the White House and different parts of the country and the White House might not be able to contain any one of these.