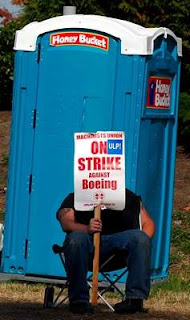 Last year, we reported on the Machinists vs. Boeing jobs saga that ended with Boeing deciding to produce part of the new 787 in Charleston, South Carolina.  At the heart of Boeing’s decision to manufacture in the South was the International Association of Machinists (IAM).

In sum, Boeing wanted a no-strike pledge from the union, which the union would only agree to if Boeing would let the union unionize more of the company.  Ultimately, the Company said, ‘no thanks’ and opened the plant in Charleston.  Of course, it helps that the South Carolina plant is union-free.

Clearly, Boeing’s move to the South enraged the union.  Now, the IAM is hoping to give Boeing some union payback by  filing charges with the National Labor Relations Board.  The union is claiming that Boeing’s new plant is a retaliatory move by the company for the union’s 2008 strike.

The Machinists union has filed a complaint against Boeing with the National Labor Relations Board (NLRB), charging that the company was retaliating for a 2008 union strike when it decided last fall to put a second Dreamliner assembly line in Charleston, S.C., rather than Everett.

It is illegal under the National Labor Relations Act for employers to retaliate against workers for engaging in lawful activities, including strikes.

In a statement, District 751 president Tom Wroblewski cited public declarations by senior Boeing executives tying the selection of North Charleston to a desire to avoid Machinists’ strikes in the Puget Sound region.

Such declarations, Wroblewski said, “send a message to workers that they should not stand up for their rights at the bargaining table. We will not allow this unlawful intimidation to stand as we prepare for the 2012 contract negotiations.”

The IAM struck Boeing for two months in fall 2008, the fourth strike in a decade. Early the following year, Boeing Chief Executive Jim McNerney told Washington’s congressional delegation the repeated strikes were a major problem and the company would seek another location for its second 787 assembly line unless the union agreed to a long-term no-strike clause.

“We were entirely transparent with the IAM,” Healy said. “We needed an agreement that would allow us to meet our customer commitments. [Emphasis added.]

While the IAM’s case seems flimsy at best, with the new union-controlled NLRB in Washington, one cannot predict how the NLRB will ultimately rule, especially given the union desire to decimate long-standing legal precedent and capitalism.

If the NLRB happens to rule in the union’s favor, it is possible one of the remedies it could order would be for Boeing to close the Charleston plant and bring the work back to the union in Puget Sound.