BREAKING: SEIU turning its back on AFL-CIO...for now 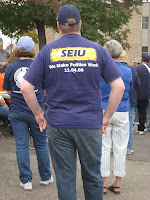 Mary Kay Henry, the incoming president of the Service Employees International Union is squelching rumors of a re-unification with AFL-CIO, according to Politico.

In an attempt to address the speculation concerning a possible re-unification, Henry sent a letter (in PDF) to her fellow Change to Win ‘partners’

In her letter, Henry writes:

SEIU has had no discussion about returning to the AFL-CIO.  The needs of hardworking women and men in this country transcend conversation about the configuration of the labor movement and instead call on us all to work together in the interest workers and their families.


SEIU remains strongly committed to our relationship with our Change to Win partners and we look forward to strengthening those relationships in the weeks and months to come.

So, the SEIU is turning its back on reconciliation for now.  This probably shouldn’t surprise too many as Mary Kay Henry hasn’t even officially taken office yet.  However, it would seem unlikely that the SEIU will stay out of the AFL-CIO forever.