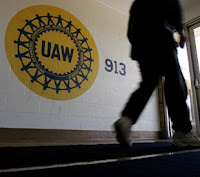 Faced with the humiliation of having to sell its famed Black Lake Resort, the UAW’s fortunes have fallen on hard times, despite gaining a majority ownership stake in Chrysler and 17.5% ownership in General Motors.

In addition to its loss of members, the UAW has also suffered an image problem over the last year.  In part, this is due to the auto bailouts and “structured” bankruptcies under the Obama administration, as well as the negative perception of the public at large.

“They think we are overpaid, lazy workers, and we are not,” said Ronda Danielson, president of UAW Local 879 in St. Paul, Minn.

Well, that may or may not be the case.

You Can Forget Joe Biden’s Afghan Disasters Now. He’s Got New Distractions for Us

Kamala Harris Plays Around, as the US Border Is Overrun
Nick Arama

The Photo That Sums Up the 'Far-Right' Rally That Terrified DC and Liberal America
Townhall
'This is not science': Ted Cruz and Thomas Massie comment on the viral video showing a daycare worker trying to mask a child
Twitchy
Biden Says Something Completely Ridiculous, but Doesn't Even Realize It
Redstate
Joe Biden's Presidency Is Hanging by a Thread as Radicals and Moderates Go to War
PJ Media