Putting Employers 'Out of Their Misery:' A Round-up on the New Union-Controlled NLRB 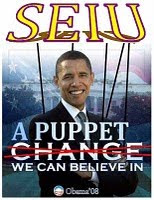 Yesterday, President Obama recess-appointed SEIU and AFL-CIO attorney Craig Becker, along with union attorney Mark Pearce to the National Labor Relations Board, making the “bi-partisan” Board a tool of union bosses.

[NLRB Chairman Wilma Liebman is an attorney formerly employed by the Teamsters and Bricklayers’ unions.]

With only one Republican Board member to three union-side Board members, even the slightest modicum of ‘neutrality’ on the Board is finished.

The following is a round-up from around the web [with emphasis added throughout]:

From the American Thinker:

I think it’s safe to say that the NLRB is now about as impartial a body as Robespierre’s Revolutionary Tribunal that condemned tens of thousands to the guillotine during the French Revolution.

Now that SEIU flunky Craig Becker has been added to the board via recess appointment, it will be as if Andy Stern woke up on Christmas morning with this heart’s desire in his stocking…

In past writings, Mr. Becker reveals himself as a radical collectivist who questions the sanctity of private property, rails against “individualism” and argues that unions are necessary in order to combat the evils of “competition and contract.”

At a time when the president should be bending over backward to reassure the nation’s employers that he’s not some Marxist out to further punish them, appointing a character of Mr. Becker’s background is like handing the NLRB a pistol and saying, “Put them out of their misery.”

Acting like a Latin American caudillo President Obama continues to thumb his nose at Congress, daring Republican members of the House of Representatives to begin impeachment proceedings against him.

Becker also believes that all Americans should be forced to join unions whether they want to or not.

There’s no compelling reason for such a radical advocate to be given such an important post. Aside from the problem of the fox guarding the hen house, it just reeks of political payback. Unions spent $400 million getting Democrats elected in 2008 and now Obama’s going to stack the deck in their favor, killing jobs and sticking it to the taxpayer in the process.

Craig Becker’s nomination is a threat to the economy because he believes small businesses “should have no right to be heard in either a representation case or an unfair labor practices case” meaning “employers have no standing to assert their employees’ right to fair representation.” These are Becker’s own words, which were published in the University of Minnesota Law Review in 1993.

President Obama on Saturday gave organized labor a big payback for its help in pushing his health-care reform across the finish line, unilaterally appointing a controversial pro-union attorney to the body that arbitrates the rules for union elections, after his nomination attracted bipartisan opposition in the Senate.

Coming just a few days after the president’s health-care plan was passed into law despite opposition from Democrats and Republicans in Congress and strong disapproval in most public opinion polls, the move promised to only heighten political tension in Washington.

Becker isn’t just a thug, he’s a labor radical. He believes in mandatory unionization. He also believes “employers should be stripped of any legally cognizable interest in their employees’ election of representatives.” This guy has union bosses everywhere smiling as he will use his position on the NLRB to further unionize the country and place it under the control of powerful organized labor.

Expect Becker to come on like a man possessed once he is ensconced at the NLRB because nobody expects the next Congress to be any more receptive to his appointment than the current one. But nine months of Becker on the NLRB is better than nothing, especially because the Senate has been markedly unsympathetic to Card Check, despite it being the union bosses’ No. 1 legislative priority.