In Pennsylvania, polls are tightening between Democrat Arlen Specter and Republican Pat Toomey.  While a recent Franklin & Marshall poll had Specter with 34% to Toomey’s 44%, the most recent RCP Average shows Toomey leading Specter by a mere 2.4 percentage points, with the most recent weighted* Daily Kos poll skewing the average by showing Specter with a six-point lead. 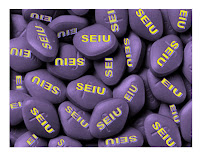 Of late, Arlen’s been looking for a little boost to aid his flagging campaign.  And, miraculously, Andy Stern’s union has come to the rescue.

Today, the octogenarian party-crosser got a little purple-pick-me-up, courtesy of the Service Employees International Union:

Sen. Arlen Specter racked up another union endorsement Monday as the Pennsylvania chapter of the Service Employees International Union said they will back the five-term senator in his Democratic primary battle with Rep. Joe Sestak.

“SEIU fights for its members so we have a natural kinship with Senator Specter who is well known as a fighter for Pennsylvania,” state SEIU Executive Director Eileen Connelly said in a statement. “He’s been there for us and now we are proud to be here for him. We have close to 100,000 SEIU members in PA and we are ready to play our part in making sure Senator Specter stays in the US Senate so he can keep working on behalf of Pennsylvania families.”

The SEIU’s endorsement is not wholly unexpected, as Specter has been the near-perfect union candidate since running into Harry Reid’s open arms.

However, the endorsement may turn out to be more curse than blessing given the expected public backlash if Democrats succeed in nationalizing health care.

Now that Specter has the SEIU’s endorsement, we’re wondering if he’ll be sporting a purple bracelet too.