Reportedly, there are 32 rules that you must know in order to survive zombie attacks.

Right now, union zombies are mustering their money and their forces to make sure that Harry Reid stays in Washington to keep feeding them. 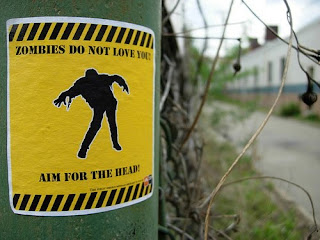 Nevada, home of Senate majority leader Harry Reid, is one of six states deemed by the union zombies at the AFL-CIO to be “firewall” states.

What is a “firewall” state?  It is a state “where a large number of Democratic officeholders—governors, senators, congressmen—are endangered, and where there are numerous union members.”

Right now, Harry Reid is one of those “endangered” officeholders, with polls showing him trailing his two likely GOP challengers by double digits.

However, November is a long way off and, like any horror movie, the bad guys never go easy.

And, Harry Reid says he can rise from the dead.

Despite his underdog status, Sen. Harry Reid declared Monday he’s confident he’ll win re-election, and he welcomed independent candidates — who could splinter the vote and spoil any GOP effort to retire the most powerful senator in the most watched race in the nation.

So, without further ado, here are 17 of the 32 Rules to Survive Zombie Attacks*:

* In the spirit of free and open participation, we are leaving the remaining 15 of the 32 Rules for Surviving a Zombie Attack open for comments and suggestions (please leave numbered comments below) and we will update this post accordingly.

** Video cameras are necessary to ward off unwarranted zombie attacks (see Kenneth Gladney) or, at least, to preserve evidence.