A Union Tactic That Truly Stinks... 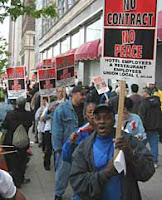 Some would argue that unions are getting more and more creative in their tactics. Others would say that union tactics like real coffins and faux corpses are offensive. But some union tactics, like this one, just stink…(literally):

A downtown hotel that has been the site of a labor dispute for more than seven years alleges in a lawsuit that members of the union representing the hotel’s striking workers sent cow manure in heart-shaped packages to scientists to discourage them from attending a convention there.

In the lawsuit, filed Wednesday in federal court in Chicago, the Congress Plaza Hotel, 520 S. Michigan Ave., claims that members of the Unite Here Local 1 sent a heart-shaped package containing cow manure to scientists scheduled to attend a convention at the hotel. The tactic was used to discourage the scientists from attending the convention. The suit did not state when the incident occurred.

Ted Cruz Points out a Big Flashing Question of Impropriety With Biden: 'It's Good to Be King'
Nick Arama

Jen Psaki Leaves Out One Crucial Detail While Criticizing the Columbus Police Shooting
Townhall
Press Sec. Jen Psaki left out one tiny detail when speaking of the police shooting of Ma’Khia Bryant
Twitchy
Tucker Carlson Causes Eruptions by Discussing Elephant in the Room of the Chauvin Jury
Redstate
Insanity Wrap #191: Did Jury Intimidation Play a Part in the Chauvin Verdict?
PJ Media