Too-Big-to-Fail GM to UAW workers: Buy our cars...please? Oh. And sell them too! 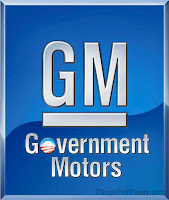 Just how bad are sales these days  for General Motors? Apparently, it’s so bad that GM can’t even get its own UAW employees to buy the cars they make and is asking for help to sell them.

But wait, that’s not the punchline and this is no joke:

GM is planning a campaign aimed at its own employees!

General Motors is kicking off a new word-of-mouth campaign to get people talking about its lineup of vehicles. The talkers GM has in mind? Its own employees.

The campaign is a whistlestop event called the”Vehicle Plant Tour” — which may not be the best title we’ve ever heard, but it’s a pretty accurate description of the project. The Tour involves GM reps visiting 40 of the company’s manufacturing plants with a number of hot GM vehicles in tow, including the Buick LaCrosse, the Cadillac CTS Sport Wagon,the Chevrolet Equinox, Camaro and Malibu, and theGMC Terrain.

At each stop, factory employees will learn about those models, and they’ll have the opportunity to test-drive them. There are also some public events on tap — presumably so that the employees can experience the vehicles in the company of family, friends, and other members of the community. Each stop on the Tour will last about a month, and in total, the campaign is expected to reach about 40,000 GM employees. The Tour kicks off at facilities in Arlington, Texas, Defiance, Ohio, and Tonawanda, New York.

That said, it sounds like a great campaign to us — not only because it will give GM employees first-hand knowledge of the company’s new vehicles, but also because it’s likely to boost morale in the workplace, which is especially important for GM right now. Over the past year, General Motors has undergone some dramatic, traumatic changes, and thanks to ongoing personnel shakeups, the dust at GM yet to settle. Making things worse, many people have criticized GM for its inefficiency and for taking bailout dough from the feds, which has led some to refer to GM as “Government Motors”. GM employees are a dedicated bunch, but in the face of all that instability and bad press, it’s been a bit harder for them to keep their spirits high. [Emphasis added.]

Another great investment from the bureaucrats in Detroit.

Instead of spending more taxpayer money (at a minimum of $2.2 million*) to fund another stupid idea, why not have the GM dealers do a UAW appreciation day and invite them down to the lot?

Oh…Never mind. Bad thought.
The dealers might not really appreciate all that the UAW has done for their business.

* Assuming each of the 40,000 employees take an hour off from their normal jobs to go stand in a parking lot and look at the new line up, at $55 dollars an hour, that means GM will be spending (at a minimum) $2.2 million just to pay people to look at the cars.

A Riot of ICE and Fire
Nick Arama