The SEIU and Union Violence: When will the violence stop, Mr. Stern?

In the world of labor relations, all too often, union violence is commonly associated with unions when they are on strike. In many cases, union violence occurs when an employer maintains his ability to continue his operations using replacement workers while unionized workers are out striking.  In some rarer instances, union violence will occur during inter and intra-union battles, with union members occasionally being the victims of union violence at the hands of their own union.

According to the Center for Union Facts, an average of nearly 300 incidents of (reported) union violence occur every year. In one example, a three-year strike conducted by the Teamsters against the trucking company, Overnite Transportation (now UPS Freight), produced 55 shootings and prompted the Teamsters to settle with the National Labor Relations Board by posting a four-page notice on the union’s website where the union agreed that (among other things):

“WE WILL NOT brandish or carry any weapon of any kind, including, but not limited to, guns, knives, slingshots, rocks, ball bearings, liquid-filled balloons or other projectiles, sledge hammers, bricks, sticks, or two by fours . . ..

“WE WILL NOT use or threaten to use a weapon of any kind, including but not limited to guns, knives, slingshots, rocks, ball bearings, liquid-filled balloons or other projectiles, picket signs, sticks, sledge hammers, bricks, hot coffee, bottles, two by fours, lit cigarettes, eggs, or bags or balloons filled with excrement . . ..

WE WILL NOT damage, threaten to damage or attempt to damage any vehicle or equipment owned or operated by Overnite, its employees or security guards, by any means or manner, including but not limited by slingshots, rocks, ball bearings, liquid-filled balloons or other projectiles, knives, picket signs, sticks, sledge hammers, bricks, bottles, two by fours, eggs, or paint, or by tearing off mirrors, windshield wipers or antennas, or breaking windows.

WE WILL NOT disable or attempt to disable vehicles owned or operated by Ovemite, by any means or manner, including but not limited to disconnecting or otherwise severing air brake lines, padlocking doors, spraying substances in or otherwise jamming locks, stealing keys, puncturing radiators, cutting hoses or door cables, flattening tires or throwing, placing or otherwise spreading any nails, screws, star nails, jack rocks or similar devices capable of puncturing tires on any road surface.

WE WILL NOT endanger or impede the progress of or harass any non-striking employee or any employee of a neutral person doing business with Ovemite, while he or she is operating a company vehicle or his or her own personal vehicle, by forcing or attempting to force him or her off the road, blocking, delaying or limiting his or her access to or passage on any road, swerving toward, driving recklessly near, tailgating or braking abruptly in front of him or her, impeding his or her progress by speeding up and slowing down, driving at speeds below the legal minimums while in front of him or her. [Emphasis added.]

Until recently, when the topic of union violence arose, the Service Employees International Union (SEIU) was missing on the list of  “most violent unions.”  In fact, this 1999 study by the National Institute for Labor Relations Research showed that, over a 25-year period, the SEIU didn’t even rank in the top 20 most violent unions. 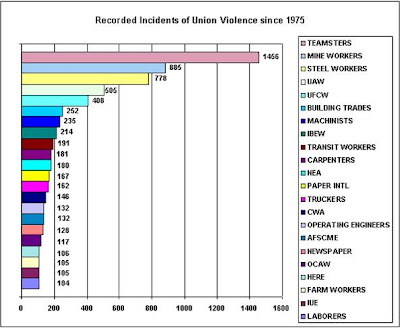 While the SEIU has never been on the radar screen for its use of violence, it has always been known as a ‘militant’ union. However, with the ascendancy of Barack Obama to the presidency of the United States, the influence of the SEIU has grown beyond its members and their employers, with much of its agenda having an impact on all Americans. As a result, its actions have garnered the SEIU and its leaders Andy Stern and Anna Burger more of a spotlight than they might have had in years past and, so far, many Americans do not like what they see.

For example, as many Americans never knew who Andy Stern was before 2008, they likely did not know that Mr. Stern:

As Andy Stern’s influence has grown, so too has knowledge of the SEIU’s militant ways and this is resulting in, more recently, the SEIU taking on the image of a ‘thug-like’ union.

With SEIU boss Andy Stern being appointed to the White House deficit reduction commission last week, many view the President’s appointment of Stern with disdain due to Stern’s “progressive” ideals of bigger government and higher taxes.

By elevating Mr. Stern to a White House commission, does this mean that the Obama administration is condoning Mr. Stern’s actions and that of his union against other unions, his members, or persons like Kenneth Gladney?

This leaves us to wonder:  When will the violence stop, Mr. Stern?

And, more importantly, will the Obama administration ever condemn the SEIU’s violence?