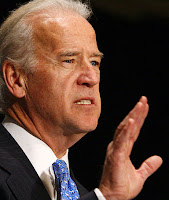 Vowing to spend one-quarter of a million dollars less than last year’s AFL-CIO Executive Council meeting, the leaders of the 57-union federation are meeting this week for their annual winter meeting at the Buena Vista Palace Hotel in Orlando, Florida.

Earlier this afternoon, Vice President Joe Biden met with the union leaders and, according to the Wall Street Journal, was “muted, and even defensive at times.”

Nevertheless, Biden paid homage to an otherwise disappointed group of labor bosses who have little to show for putting Biden and his boss, Barack Obama, in the White House.

“I think they owe some answers this time,” said Thomas Buffenbarger, president of the International Association of Machinists. “There’s always something that crops up and gets in the way of labor’s agenda.”

BusinessWeek says that union bosses are “reeling” from the losses they’ve suffered under Obama and the Democrats.

“The labor movement is at a crossroads, and it has to rethink its political strategy,” said Amy Dean, a former labor official who is co-author of “A New New Deal,” a book about reshaping the labor movement. “The conversations that we are having at our kitchen tables and our living rooms that express our disappointment with this administration are very similar to the conversations that we had under the Bush administration.”

“We’re demoralized,” said Robert Haynes, president of the Massachusetts AFL-CIO. “We’re not happy about anything.”

Struggling to cope with their lack of progress, several are laying the blame at the feet of the GOP:

“I think that everyone is frustrated literally, but it’s important to understand who we have to be frustrated with,” said United Steelworkers president Leo Gerard.

Gerard said unions are angry about Republican tactics they view as obstructionist and a few conservative Senate Democrats who are making it tough for Obama to push through his agenda. Gerard said that Democrats may not count on the usual support they expect from union members in this fall’s elections.

“If we don’t have clear progress and clear attempts at progress, we’re going to have a hard time motivating our folks,” he said.