As long as Obama does the SEIU's bidding, he is and always will be "anti-business" 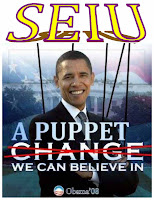 President Obama has been bending over backwards lately trying to craft himself as “pro-business/pro-free-market.” Almost invoking the spirit of Ayn Rand, Obama has even declared himself to be “an ardent believer in the free market” while making an effort to rebut claims that his policies are “socialist” (a never-before heard statement from a President of the United States, as far as we can tell).

In a recent BusinessWeek interview, Obama even went so far as to state that “We are fierce advocates for a thriving, dynamic free market,” before stating (later in the interview) in a Joe-Wilson moment:

You would be hard-pressed to identify a piece of legislation that we have proposed out there that, net, is not good for businesses.

With all due respect, Mr. President: …er…That is not quite accurate.
Just today, the New York Times reported that the Obama administration, in a throwback to the Clinton administration’s “blacklisting” program, is looking at using the awarding of government contracts as a way of paying back organized labor, which will affect one quarter of all working Americans.

By altering how it awards $500 billion in contracts each year, the government would disqualify more companies with labor, environmental or other violations and give an edge to companies that offer better levels of pay, health coverage, pensions and other benefits, the officials said.

Because nearly one in four workers is employed by companies that have contracts with the federal government, administration officials see the plan as a way to shape social policy and lift more families into the middle class. It would affect contracts like those awarded to make Army uniforms, clean federal buildings and mow lawns at military bases.

“We strongly opposed the Clinton blacklist regulations,” Mr. Johnson said, “and this appears worse than that.”

Then, of course, there’s the so-called “cap and trade” which, according to the Wall Street Journal, results in the greatest inequities being imposed “on the parts of the U.S. that rely most on manufacturing or fossil fuels — particularly coal, which generates most power in the Midwest, Southern and Plains states.”

Next up is the mother-of-all bad ideas, the job-destroying Employee Free Choice Act (or EFCA).  EFCA, which consists of effectively eliminating workers’ right to a secret-ballot during unionization campaigns and forcing government-imposed union contracts on businesses (large and small), has been estimated to add one percent of unemployment for every three percent of union membership gains.

Among the pro-labor policies touted in the report on the “Middle Class,” starting on page 23 is a page plus on the importance of EFCA and the values it embodies. The report calling for EFCA does not mean it’s less dead, it’s just that the Administration has a responsibility to stay positive on the party line.

“Unions” or “unionization were mentioned 34 times, by my count. By contrast,”small business(es)” were mentioned just 8 times. The word “entrepreneur” is never even mentioned in the report. Heck, even the Great Depression got mentioned twice.

The House Republicans’ Committee on Education and Labor had this to say on task force report:

“Over the course of this year, the Task Force will continue to promote the benefits of union membership and to amplify the President’s message of the importance of EFCA as a way to guarantee workers who want to organize a fair chance to do so.”

Lastly, Mr. Obama’s and his fellow Democrats’ up-in-the-air-at-the-moment and ever-shifting attempt to nationalize the America’s health care industry is being pushed with yet-unknown edicts on business, as well as an unknown price tag. However, one thing is sure, according to the Heritage Foundation, unions will be the beneficiary of “Obamacare.”

The union movement will gain billions of dollars if Obamacare passes.

The most obvious payout is the taxpayer bailout for union health plans. Many union-negotiated retiree health plans cannot pay their scheduled benefits. Rather than reducing benefits, the bill passes those costs onto taxpayers to the tune of $10 billion. But that is small potatoes compared to what the bill will do for union membership.

If the government runs health care, then the SEIU’s membership rolls will swell. If union rates among nurses in America rose to Canadian levels, then the SEIU would bring in over a billion dollars a year in new mandatory dues. Newly organized technicians and other medical support staff would add even more to that total. The Labor movement has a huge financial stake in the government dominating health care.

We have long commented on SEIU’s Andy Stern and Anna Berger’s influence on POTUS.  Prior to Andy becoming the most frequent visitor to the White house and before Obama ascendency to 1600 Pennsylvania Avenue, then-candidate Obama even pledged his allegiance to the SEIU.
So far, Obama’s allegiance to the SEIU has resulted in the President’s efforts to push initiatives that are beneficial to the SEIU (and other unions), as well as the elevation of key SEIU officials to influential positions:

According to The Hill:

Business groups opposed to the card-check bill that has dominated fights between business and labor for more than a year railed against the decision to appoint Stern, president of the Service Employees International Union (SEIU).
“Either the White House doesn’t read the newspaper or simply doesn’t care, but naming Andy Stern as a member of the National Commission on Fiscal Responsibility doesn’t pass the laugh test,” said Katie Packer, executive director of the Workforce Fairness Institute.

As the SEIU has spent millions upon millions of its members dues money on putting President Obama into the White House, one could expect the President to reward his backers.

However, for the President to try to claim that he is a proponent of the free market or try to downplay his anti-business creds is beyond laughable, it’s preposterous.