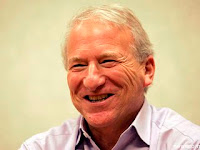 The lavender-lapeled boss of the Union of Purple People Eaters, otherwise known as the SEIU, is being considered a top contender for President Barack Obama’s so-called deficit-reduction panel.

Obama has given himself six appointees to the 18-member panel, which is tasked with producing a plan to balance the primary government budget — outside interest on debt — and deliver it to Congress by Dec. 1. Obama has already named former Clinton chief of staff Erskine B. Bowles and former Republican senator Alan K. Simpson to co-chair the panel. Cote, Stern and Rivlin could be appointed in the coming days, the official said, leaving one slot to be filled. The official spoke on the condition of anonymity to discuss internal deliberations.

Stern and Rivlin are well-known in Washington. Stern is president of the 2.2 million-member SEIU and an ardent supporter of Obama’s health initiative. Rivlin was founding director of the Congressional Budget Office and White House budget director under Bill Clinton. She has long called for a mix of new taxes and changes to Social Security, Medicare and Medicaid to bring budget deficits under control.

The three did not respond Saturday to requests for comment.

Given the SEIU’s successful rape-the-rich campaign to increase taxes on Oregonians, as well as his union’s penchant for plundering states like California, we can only assume his recipe for deficit reduction will be to drain the private sector with higher taxes.