By LaborUnionReport | Feb 08, 2010 5:19 PM ET
Share Tweet
Share
Tweet
A couple of weeks ago, we posted on the issue of the American Federation of State County and Municipal Employees wanting an 86-year old school crossing guard fired from his job volunteering as a school crossing guard in Wassau, Wisconsin. 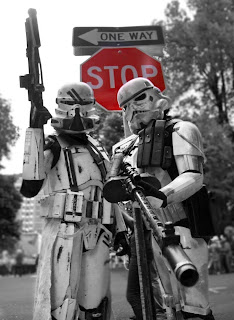 In short, AFSCME wants the 86-year old volunteer fired because they believe the work is “union work” even though there is no crossing guard in the school’s budget.
The Wassau Daily Herald has weighed in on AFSCME’s attempt to stop the 86-year old Warren Eschenbach from volunteering his time:

AFSCME’s position is crazy, and it needs to immediately drop its grievance, which has already been denied by the city. The choice here isn’t between a union crossing guard and a volunteer one — it’s between a volunteer guard and none at all.
Riverview has never had a paid crossing guard. And in response to the union grievance, the Wausau Police Department said that even if Eschenbach were forced to stop volunteering, the city wouldn’t hire someone else take the job.

Now AFSCME has the opportunity to take its grievance to arbitration. If it wins, Riverview Elementary School will lose its crossing guard. Is that really the outcome the union wants? That Riverview parents want?

Eschenbach, a retired Wausau Water Works employee, worked as a crossing guard for five years at a different school previously. He is trusted by Riverview Principal Steve Miller, and by all indications he’s popular with the students. Kicking him off the job would have no benefits whatsoever, and it would do harm by removing adult supervision from the school intersection.

There’s a larger point here. The volunteer work Eschenbach does is valuable and important. We need to have a system that allows for citizen volunteers. For the union to attempt to get in the way of that is obstructive, it’s unnecessarily territorial, and it’s wrong.