Why so Socialist? Or, you can't have your cake and eat it too. 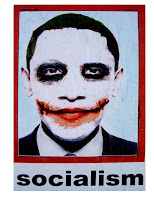 Last year, the mainstream media (un-affectionately known as the MSM) and a number of pundits on the left were caught completely off guard when posters of President Obama began appearing mysteriously in Los Angeles and Atlanta.  It was a brief story, but it made a big splash around the internet.

“Socialism” was one of seven terms included in a Jan. 26-27 Gallup poll. Americans were asked to indicate whether their top-of-mind reactions to each were positive or negative. Respondents were not given explanations or descriptions of the terms.

Americans are almost uniformly positive in their reactions to three terms: small business, free enterprise, and entrepreneurs. They are divided on big business and the federal government, with roughly as many Americans saying their view is positive as say it is negative. Americans are more positive than negative on capitalism (61% versus 33%) and more negative than positive on socialism (36% to 58%). 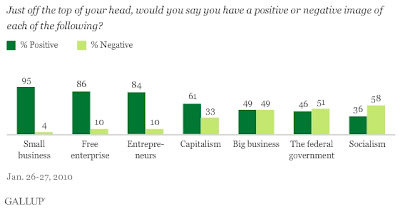 Given Americans’ 36% positive views of socialism, it is surprising that only 10% view ‘free enterprise’ and ‘entrepreneurs’ negatively.   In addition, an overwhelming 95% of Americans polled view small business positively. 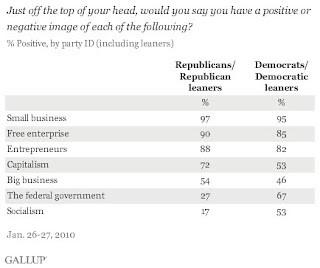 It seems incongruous that a majority of Democrats could favor socialism while at the same time an even larger majority favor free enterprise.  This leads one to wonder, do Democrats really understand socialism?

If a majority of Democrats favor socialism and, by a wider margin, favor free enterprise too, it seems that many Democrats don’t understand that there can be no ‘free enterprise’ under a socialist system.

This leads us back to the mysterious joker posters.

Following the erruption over the emergence of the posters, Robert Dougherty wrote a good piece, correctly pointing out that the Obama as the joker comparison is inaccurate:

The Joker was many things, but he was hardly a socialist. In fact, the Joker is the polar opposite of a socialist, and anyone who watched The Dark Knight would know that. Socialism is the result of an all-powerful central government that runs every aspect of life — but the Joker subscribes to anarchy, one of socialism’s polar opposites.

If the Joker was a socialist, he would be destroying Gotham in the name of an all-powerful state. Instead, the self-described “agent of chaos” nearly brought down the state itself, and all of its most cherished institutions, so that nothing could bring order to Gotham.

Like the inaccuracy of confusing the Joker’s anarchism with socialism, so too it seems are people confusing socialism with freedom.

You cannot have your cake and eat it too.

Get Ready for President Hillary Clinton
Townhall
Dr. Fauci responds to Rand Paul and Ted Cruz, says he shouldn't be prosecuted because 'I represent science'
Twitchy
Rand Paul Takes Fauci to the Cleaners and Hangs Him out to Dry
Redstate
Your Thanksgiving Weekend Round-up! Shoplifting, Black Supremacy and Antifa Weeps!
PJ Media