Did donning their infamous purple shirts just put these SEIU members in jeopardy of retaliation from their union bosses? 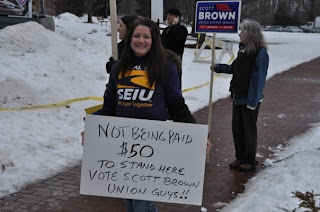 Andy Stern and his Union of Purple People Eaters (otherwise known as the Service Employees International Union) have got to be going nuts over these members seeming “gross disloyalty and conduct unbecoming a member.” 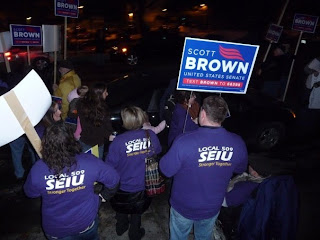 The question is, will union bosses at the SEIU respect their members’ [U.S.] constitutional rights?
We hope so.  In either case, we’ll be watching and waiting to report.
h/t: RedMassGroup.
—————————————
“I bring reason to your ears, and, in language as plain as ABC, hold up truth to your eyes.” Thomas Paine December 23, 1776

How Did This Ever Get Published? NYT Video Takes a Blowtorch to Blue States
Townhall
'Tell us you're a racist elitist without saying you're a racist elitist': Ana Navarro DRAGGED for tweeting racist AF meme on Thanksgiving
Twitchy
Joe Biden Moves to Completely Screw You at the Pump
Redstate
Whose Land Did Native Americans Steal Before Europeans Stole It From Them?
PJ Media