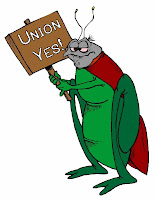 As 2009 comes to an end and union bosses prepare for an early 2010 push for the job-destroying and hallucinogenically-named Employee Free FORCED Choice Act (EFCA), unions are getting a near-free pass as media types and union bought-off politicans portray today’s unions as democratic, worker-run organizations.
A case in point is the union talking point that EFCA is intended for workers who want to “form” unions.  This is particularly prevalent through the union-paid EFCA astro-turfing group American Rights at Work, which describes itself as an “educational and outreach organization dedicated to promoting the freedom of workers to form unions and bargain collectively.”
The reality is, unions have not spent hundreds of millions of dollars buying politicians,setting up an astro-turf organization like ARAW, and pursuing a misleading campaign to deceive America only to allow workers to former their own unions.  After helping to push industry out of the U.S., today’s command and control union bosses want workers in their unions in order to collect dues.
Unfortunately, many of today’s unions are top-down autocracies which, in many cases leave “rank and file” union members out in the cold.
Take, for example, this ad for a “Service Center Organizer” for the now-infamous Service Employees International Union:

Purpose: To assist the leadership of Local 615 in building a powerful rank and file union, through organizing and representing workers within the Union’s jurisdiction. Specifically, the role of the Service Center is to enforce the terms of the collective bargaining agreement on behalf of members. Equally important, the Service Center’s role is to increase the capacity of the internal organizing staff to identify, recruit and train member leaders by assuming a larger share of member representation. [Emphasis added.]

By posting this ad, the SEIU apparently failed to see the irony of talking about a “rank and file union” while attempting to hire from outside the union.  Nor does the union apparently see the irony of having a so-called “service center,” which is nothing more than a non-rank-and-file-run call center run by union bosses to deal with union members’ problems (no face-to-face member contact is necessary).

Another example of a union that apparently feels that grooming rank-and-file union members to build their own union would be this ad for Organizers-in-Training, Organizers, and Journey Organizers from the American Federation of State County & Municipal Employees (AFSCME):

Organizers-in Training, the ad states, “learn the nuts and bolts of an organizing campaign from home calling unorganized workers, to organizing direct actions, to preparing for a first contract campaign.”  For this, OiTs are offered a starting salary of $36,648 with free single or family health coverage, car allowance, paid travel, 12 paid holidays, 401k, pension plan and more.  Journey Organizers (organizers with at least 3 years of organizing experience) start at $52,670 but often, according to AFSCME’s reports with the US Department of Labor, take in more than $100k.