Untrusted Teamster Leaders to Members: A "No" Vote Could Doom YRC Worldwide, Up to 40,000 Could Lose Jobs 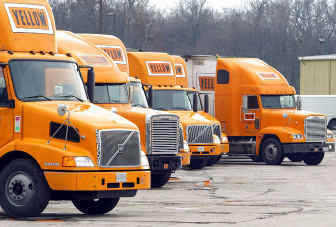 It’s considered the ‘Last of the Mohicans’ in the world of big Teamster-represented less-than-trailer load (LTL) carriers, all the rest having been doomed to the scrap heap of uncompetitive unionized trucking companies.

Now it seems, however, the question is not “if,” but “when” YRC Worldwide will be closing up shop.

YRC Worldwide, which is the combination of Yellow Freight’s 2003 acquisition of Roadway and its later merging of operations, has around 40,000 employees nationwide, the majority of them represented by the International Brotherhood of Teamsters.

For a variety of reasons (the economy, fuel costs, as well as its union obligations), the company has been struggling to survive for more than a year now. In fact, the company has had to go to the Teamsters’ leadership twice for concessions in their labor contracts.

All told, the Teamsters leadership has agreed to wage cuts of 15% and the company has gotten the union to agree to an 18-month suspension on pension fund payments, saving the company an estimated $35 to $45 million per month.

[Note: The primary pension plan that YRC had been contributing to is the critically underfunded Central States Pension Plan (see the movie Casino as a reference).]

According to the Houston Chronicle, YRC had “$1.69 billion in liabilities and $1 billion in assets as of Sept. 30. It has sold real estate, cut thousands of jobs and taken other steps to keep operating. The company lost $158.7 million in the third quarter.”

In November, YRC closed its big Richfield, Ohio terminal, sold part of its logistics unit, and launched a debt-for-stock swap in order to try and stave off bankruptcy.

Now, there may be even more trouble on the horizon for the company which, in short order, may drive YRC straight off a cliff. Union members are beginning to have serious doubts about their union leaders.

In Chicago, Teamster-represented workers are rebelling at the union leadership’s insistence that they vote to agree to the concessions that were already negotiated.

According to a forum for Teamster members, one unidentified member exposed the mistrust between the Teamster leaders and the members by ‘reporting’ on what happened when IBT leadership visited Chicago on Tuesday:

Tyson Johnson and the Flynn crew visited the Chicago Terminal of Holland today, well lets just say they didn’t the welcoming they expected. The members were told that 39,000 jobs rest on the shoulders of 710 and 705 members to except the MOU! Flynn had stated that YRC will probably close regardless, and that by voting no it will just be sooner, well lets just say, they were told to stick it in a place…

Tyson and Flynn told the members that its all about the pension (how funny, because Flynn told everyone that the pension was no concern anymore) and without 710 and 705 accepting it that they are still responsible for the pension. Then Flynn had the nerve to stand there and tell everyone that he has never lied to them, “but he just did” Oh! “he probably forgot about the lie at the meeting prior to the last vote that stated its only about the 5 percent” ….

Well lets just say that at the end of the meeting they were all directed where to go!! Well guys I guess there you have it, they admitted its about the pension, the company wants out, and we better accept it. Pat Flynn gave a member his word that they will put back into it in 18 months or he will vote no to it himself, “I feel so warm and cozy inside, when the union stands behind us”!

According to the Teamsters for a Democratic Union (a dissident group within the Teamster’ union) union leaders are threatening members that, if they don’t vote to accept the cuts, the entire company may shut down:

On Dec. 1-2, YRC management gave time to Flynn and Johnson to offer a hard sell to Local 705 and 710 Teamsters at the four Chicagoland YRC and Holland terminals.

On Dec. 8, Local 710 dock workers will vote for a third time on the concessions, and Local 705 for the second time. Both groups previously rejected them by a 2-1 margin. The vote will be held at the terminals, not by mail.

This follows Hoffa’s power grab of November 24, when the IBT claimed the power to dissolve the Local 705 and Local 710 contracts, which do not expire until 2013, into the national freight contract. That move gave the IBT total control of the bargaining and disbanded the union bargaining committees. But they feared imposing concessions without a vote because it would lead to a lawsuit to protect members’ right to vote.

Across the nation, in Washington and Oregon, Teamster members at YRC’s Reddaway have also given a ‘thumbs down’ to the concessions.

Reddaway Teamsters in Washington and Oregon have narrowly rejected a proposed contract which the IBT and YRC agreed to.

By a vote 214-208 the Teamsters at YRC’s regional carrier said No, and will retain their contract wages and benefits until a contract is ratified.

It seems as though, it is only a matter of time before YRC declares bankruptcy. It could be a matter of days, weeks, or months.

However, when YRC does get tossed into the scrap heap of so any other Teamster-represented trucking companies, while many will point to the economy as the cause of the company’s demise, it will be misplaced blame. The economy will have only exposed a company already vulnerable due to a union whose leaders are not trusted by their members.

For the Teamsters, it will be especially humiliating when YRC crashes since the union that Jimmy Hoffa built with companies like Yellow and Roadway will be losing one of its biggest players while Hoffa’s son is in control.

For more on the Teamsters union, go here.

“I bring reason to your ears, and, in language as plain as ABC, hold up truth to your eyes.” Thomas Paine December 23, 1776

Biden Has Lost the Middle...But a Lingering Question Remains
Townhall
L.A. Dept. of Public Health explains why mask-less Emmy Awards were not in violation of mandate (Just guess why -- Hint: They're SPECIAL)
Twitchy
Border Patrol Debunks the Fake 'Whipping' Haitians Story but Media Doesn't Care About the Truth
Redstate
The Laughable Excuse for Why Biden's Activities Will Be Limited at the UN General Assembly
PJ Media