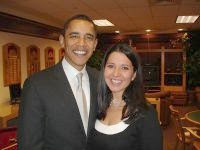 The daughter of Ernie Duran, Jr., the accused nepotist and money mismanager, as well as soon-to-be ex-president of United Food & Commercial Workers’ Local 7 in Denver has filed papers to run for the House District 5 seat being vacated by a term-limited Joel Judd.

Crisanta Duran, is legal counsel for the UFCW local, as well as listed as the 19th vice president (out of 25) for the local. Her father, who recently lost a re-election bid (which he and his union-employed family are currently disputing) is the president of the local.

UFCW Local 7, according to reports on file with the US. Department of Labor, took in over $13.8 million in 2008 from Colorado workers (most of whom work in Denver and vicinity grocery stores).

According to one news report:

Former employees said Duran and his family are living the good life on the union dues of some of the lowest-paid workers in the state.

[Note: According to the DOL report, the average UFCW Local 7 members paid an average of $644 in dues and initiation fees. Because Colorado is not a Right-to-Work state, the vast majority of these workers are required to pay union dues or be fired from their jobs.]

“I’m not sure if the common union member is aware of how much the Duran family brings home in salary. In addition to their salary, the expenses that they have that the union pays for,” said Irene Goodell, Duran’s former secretary who was fired and who is suing for wrongful termination.

Ms. Duran, her father, as well as her brother (Ernie Duran, III aka E3) are fighting to retain their lucrative positions with the UFCW local, but that combativeness should come as no surprise, according Denver’s Westword blog:

Duran’s combativeness should come as no surprise to readers of two late ’90s reports by former Westword staffer Eric Dexheimer. The articles told the tale of a young UFCW worker who was sexually assaulted by her boss, Gilbert Padilla; afterward, she filed a civil lawsuit pinning part of the blame for the attack on Local 7. May 1997’s “An Unholy Union” notes that Duran is a boxing aficionado who kept a heavy bag in his office and, according to several sources, once threw a man against a car and threatened to “beat the sh*t” out of him. He was also the target of a May 1992 restraining order granted to one of his neighbors after he allegedly “climb[ed] over a six-foot privacy fence to attack and beat plaintiff in plaintiff’s backyard.” Dexheimer’s followup piece, February 1998’s “Union Busted,” confirms that the assaulted woman settled her lawsuit for a lump sum payment of $200,000.

Meanwhile, in addition to its internal bickering over nepotism and financial mismanagement, Local 7 has been locked in a two-pronged battle. One is with Denver-area grocers, where UFCW members are voting over the next two weeks on the companies’ ‘last, best and final offers.’ The other battle has been with the Washington, DC-based UFCW international union which has seemed reluctant to let Local 7 leaders call grocery workers out on strike.

Whether Ms. Duran a) retains her UFCW member-paid $119,000 per year salary, b) moves up in Colorado politics to become another pol beholden to unions, or c) gets ousted along with her father, will be determined a multitude of factors, including Colorado’s Democrat voters.

Reports: Taliban Decapitating Children and Hunting Down US Collaborators
Townhall
AUDIT UPDATE: Settlement reached over routers between Maricopa County and the Arizona State Senate
Twitchy
Ted Cruz Has a Question on the Droning of an Afghan Aid Worker That Must Be Answered
Redstate
France Recalls Its U.S. Ambassador After Biden Blows Up NATO. But Mean Tweets or Something.
PJ Media